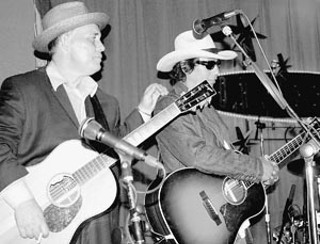 It was an orgy, a marathon, or as one attendee put it, "Heaven." Whatever you call it, this benefit for Jon Dee Graham's son Willie was likely one of the greatest outpourings of love this town has ever witnessed. The sold-out show also demonstrated yet again the power, cohesiveness, and incredible range of talent of the Austin music scene. There were surprises: Matt the Electrician's charisma as bandleader, the soul stirrings of Walter Tragert, and the glittering harmonies of the New Hot Damn, aka Trish Murphy, Kacy Crowley, and Renee Woodward. Around 11pm, with nearly five hours down and three to go, the event kicked into high gear with Honky's electrified boogaloo augmented with Jon Dee Graham's guitar. Ian McLagan and Ray Wylie Hubbard have grayed more than a little bit over the years, but they followed one another with sweat-soaked rock & roll that belied their status as elder statesmen and left the seemingly inexhaustible audience dizzy and roaring. Hubbard's medley of "Wanna Rock and Roll" and "John the Revelator" was particularly exhilarating. James McMurtry was up to the task of following those two with a stunning set of guitar-fueled poetry that included a vicious accounting of "Choctaw Bingo." When Charlie Sexton and Alejandro Escovedo joined Graham onstage for an acoustic set to end the evening, it played out like a denouement, bringing everyone back down to earth. Graham had the last say with a heart bursting "The Majesty of Love" before wrapping things up with a joyfully electric take of a song his 6-year-old son had written called "Rock & Roll." As the head-spun crowd headed into the night, a declaration from McLagan earlier in the night set itself in stone: "This is what Austin's all about." – Jim Caligiuri

No opening, no welcome, no “We’re the Skunks.” Just rip-roaring riffs opening “All Tied Up” as onetime bandmates Jesse Sublett and Billy Blackmon joined Jon Dee Graham playing for dear life – his son’s. The Skunks kicked off the night’s second benefit for Willie Graham with raging guitar and the same attitude manifested more than 25 years ago. “We weren’t New Wave,” Sublett announced. “We were rock & roll!” Every song proved it too, from “Gimme Some” and “Telewoman” to “Push Me Around” and “Earthquake Shake.” Roky Erickson and his brother Sumner appeared for a brief, heartfelt four songs, followed by Skunks peers the Standing Waves. All these years later, it was striking to hear how beautifully both David Cardwell’s (“Every Step,” “Early Warning”) and Larry Seaman’s (“No Judy”) songs hold up amid covers like Richard Hell’s “Kid With the Replaceable Head” and the blistering closer, “White Light/White Heat.” After another Raul’s era act, the Delinquents, finished “Little Latin Lupe Lu,” the audience was turning over from past to present as Driver took the stage with their heartfelt set. Closer Stephen Bruton wasted no time bringing onstage Hal Ketchum, who’s fought his share of great battles and brought irresistible charm and prayers to the evening before his sponsor’s gang – Malford Milligan, Yoggi, Nick Connolly, and Brannen Temple – summoned their earthy groove. And who could resist the cause, a little boy facing excruciating pain and treatment? Leave it to the Ericksons to reveal the spiritual heart of the evening. Their two voices entwined in sibling harmony, Roky sang 13th Floor Elevators chestnut “Splash 1” and then his ever-wonderful “Starry Eyes.” Roky, sounding more confident than ever, basked in warm applause and love. Here in this evening benefiting a boy, an elder statesman rock star found his moment, too. – Margaret Moser