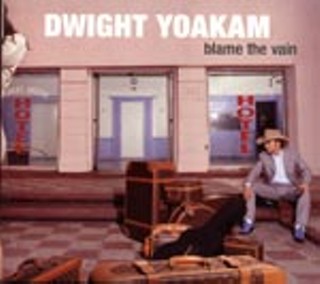 Since Dwight Yoakam's acting career bloomed with 1996's Sling Blade, his albums have changed from the widescreen, leading-man turns (and corresponding sales) of Guitars, Cadillacs, Etc., Etc. and This Time to moodier genre pieces A Long Way Home and Population Me. On Blame the Vain, as you might guess from the title, he's interested in Beverly Hills, swimming pools, and movie stars. His Kentucky croon is still one of the purest in country, even if showbiz has him wondering "Does it show that every smile is a lie?" And instead of Queen and Cheap Trick, these days his rock interests, at least judging by "Intentional Heartache" and "Three Good Reasons," lie along the lines of old L.A. pals X and the Blasters. "Just Passin' Time" says buenas noches from that same lonely room. There's quite a bit of "Suspicious Minds" in "When I First Came Here," when Keith Gattis' Memphis guitar rides Skip Edwards' gospel piano to the epic conclusion. Plenty more Elvis in "Watch Out" and "I Wanna Love Again," too. Excepting Hollywood Homicide, Yoakam's already made much better acting choices than Elvis. We're lucky he still cares about making albums, too.