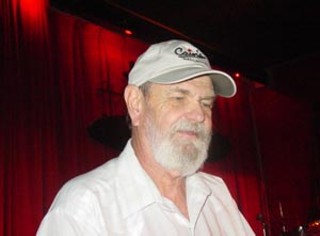 Jim Murphy, the steel player for Asleep at the Wheel, parked onstage with Heybale on Sunday nights whenever he was off the road and in town. Every member of the band mentioned Murphy's passing in January, but Redd Volkaert's eloquent recollection sparkled with the spirit of the late musician:

"I was Jim Murphy's biggest fan so I am a little biased, but he was my hero as a musician. He knew more music than anyone I've ever played with in my whole life, an amazingly talented, gifted musician who played steel and sax. We went back a long way, played in several bands in Nashville.

"After I moved here, Ray Benson came to see Heybale and said the Wheel was looking for a steel player, so I recommended Murph. They hired him and he moved here, so he was around town. We wound up getting him in Heybale when he wasn't touring with the Wheel. Everyone loved him. He was one of the funniest, sneakiest, shit-stirring pranksters – in a good way!

"Jim got cancer four times. Three times he beat it and the fourth time it got him. Even when he was going through chemo, he was never down. He had no hair, beard was gone from chemo, and he looked 90 years old. So he shows up in a ball cap with a fake gray-haired ponytail and a pair of glasses with a dick for a nose and says, 'Hey guys, did ya miss me?'

"When I grow up, I wanna play just like him, except on guitar."