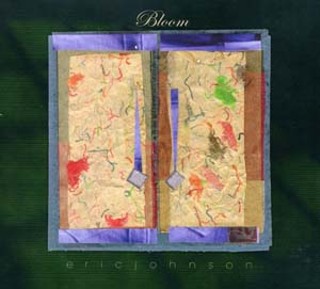 Perhaps Eric Johnson needs to record an entire album of sentimental love songs, like Bloom's "Sunnaround You" and "From My Heart." It might just open up the veteran Austin guitarist's subsequent albums for other sounds, thus getting the, "Where's the next Ah Via Musicom?" monkeys off his slender back. Johnson's 1990 platinum and Grammy-winning breakthrough is now 15 years old, and with the renown ace having recently passed the half-century mark, it's only natural for his focus to change over time. Then again, Johnson doesn't make things any easier with his timeless quest for perfection, which bogged down AVM's follow-up, 1996's multifaceted, but ultimately diffuse and overproduced Venus Isle. Don't let the nine-year hiatus between Venus Isle and Bloom be misleading, however. Johnson's strung gold has chimed four times in that span: digitizing the Electromagnets' 1975 fusion powerhouse debut; the subsequently stinging, sometimes corny (and originally unreleased) Seventies solo debut Seven Worlds; studio vault sampler Souvenirs; and Alien Love Child's blues power trio Live and Beyond from 2000. Where does Bloom land? As with Venus Isle, the vocals are highly treated, the vocoder working overtime here. Luckily, smokin' instrumentals ("Summer Jam," "12 to 12 Vibe," "Bloom") and crystalline acoustic numbers ("Tribute to Jerry Reed," "Ciel") also work overtime. Playing other cards in his hand, Johnson's poignant lyrics elevate "Sad Legacy," "Magnetized" is an instrumental jazz-funk nod to the Electromagnetics, and Wes Montgomery comes alive in the cocktail jazz of "Hesitant." Too bad Johnson didn't stop there. Dylan's "My Back Pages" suffers from too much studio think (solo vox and acoustic would be more fitting), and the length of the overly long romantic tunes somehow got switched with the too-short instrumentals. That love song album is sounding better already, but then maybe Johnson's already segmented his talents. Fans pining for the silken, saturated stringwork of 1986's Tones or follow-up AVM are better sated by Alien Love Child, as Bloom follows in the footsteps of Venus Isle. With more spontaneity and less gravitas, Bloom is better.