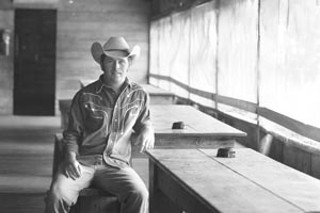 Jason Allen is standing in Gruene Hall. Not long ago, he walked into New Braunfels' historic (and surprisingly small) honky-tonk and got so nervous he could barely take the stage. After all, this is hallowed ground for country and roots musicians the world over: Selling out Gruene Hall is a rite of passage on par with packing the Fillmore in San Francisco or Blue Note in New York City. Most of Allen's heroes and predecessors, from Willie Nelson to Pat Green and Kevin Fowler, have graced this room of low ceilings and long tables.

Then Allen topped the Texas Music chart with 2002 breakout single "Lucky Arms" and the more recent "Your Heart Turned Left (& I Was on the Right)," and his playful, energetic, self-deprecating stage show helped him become one of the hottest performers on the Lone Star C&W circuit and beyond. One of his Gruene shows last year was even taped for a Tonight Show segment starring Freddy Got Fingered spaz Tom Green. These days, when Allen steps onto the hall's hardwood stage, a stone's throw from the Guadalupe River and not much farther from his home nearby, the butterflies are there for an entirely different reason.

"Now I get nervous if I don't bring people," admits Allen. "A lot of people shoot for way bigger things. They'll shoot for a million-seller. But seeing where I was when I first started in this area, nobody knowing who I was, being able to pack out Gruene Hall right now is just amazing."

Allen sits at the head of a pack of cowboy-hatted roustabouts – Deryl Dodd, Jason Boland, Jamie Richards, Randy Rogers, Allie Danielle – who have turned the native revival started by Green, Fowler, and Cory Morrow about a decade ago into a commercially vibrant industry. Thanks to new media like XM Satellite Radio, Allen is discovering fans and frontiers far beyond the Sabine River; next month, in the space of a week, he'll play both Banita Creek Hall in Nacogdoches, Texas' oldest city, and the Mr. Banjo's Country Music Festival in Barcelona, Spain. No matter how many orders for his albums Something I Dreamed and Wouldn't It Be Nice pour in from Washington state, Florida, and France, however, Texas will always be paramount in his mind.

"I'd love for Texas to just go crazy," says Allen, "because my family's from Texas, my ancestors were all from Texas. I'd like to be able to say I made it first in Texas and then go from there. The rest of America, the rest of the world, if they don't catch on, at least I can say I made it in Texas."

For all intents and purposes, he has. Allen draws as many people to urban honky-tonks like Blanco's in Houston and Hill's Cafe in Austin as he does to rural dance halls in Coupland and Port Aransas. "Lucky Arms" and "Your Heart Turned Left" pop up on KVET as often as Toby Keith or Brooks & Dunn. Furthering his Lone Star bona fides, Allen's late mother was a fifth cousin of Western swing godfather Bob Wills, and some of his earliest memories are of her serenading him with Wills' songs ("That's all she would ever sing"). His record label, the Houston-based D Records, helped launch the careers of Willie Nelson, George Jones, and George Strait before folding in the early Eighties. When Wes Daily, grandson of founder H.W. "Pappy" Daily, revived the label a few years ago, Allen was the first person he signed.

Allen was born in 1976 in the industro-chemical Houston suburb of Pasadena, where the gargantuan nightclub Gilley's sparked the Urban Cowboy craze a few years later. But by the time John Travolta mounted that mechanical bull, Allen's family was long gone. His bricklayer father, who joins Allen for a medley of spirituals on Wouldn't It Be Nice, took various jobs in the East Texas lakeside town of Onalaska, where Allen acquired the lifelong passion for fishing he sings about on "John Boat Blues"; Virginia, where they lived for a year and a half; and Albuquerque, N.M., where Allen listened to Hank Williams Sr. over and over in the family's motel room and "thought it was the coolest sound in the world."

By his teens, when he decided that playing music was all he wanted to do, Allen's family had settled near Conroe, on the forested northern fringe of the Houston area. His guitar had been his constant companion for a number of years ("I'd fall asleep with it in my bed"), and Allen was used to tagging along with his folks when they went honky-tonking, busking for a few spare dollars here and there. As much as he loved Hank Williams and Bob Wills, Allen had fallen just as hard for early rock & roll: the hiccupy drawl of early Elvis, Little Richard's jive-cat hoodoo, the otherworldly voices of Roy Orbison, the Everly Brothers, and Platters, not to mention the magical mysteries of the Beatles. Allen's parents backed him wholeheartedly.

"They told me, 'If you want to do this, we'll put 100 percent of our time into trying to make you what you want to be.'

"And I did, man. I wanted to be Elvis right there."

Allen's dad hooked him up with an old high school buddy of his, A.V. Middlestadt, who helped Southeast Texas singers Mark Chesnutt and Clay Walker on their paths to stardom. Middlestadt kept Allen in his studio for hours, cutting demos and woodshedding vocals. Schooling him on guitar was local go-to guy Randy Cornor, who trades licks with Austin stalwart Redd Volkaert on Wouldn't It Be Nice's "Chicken Pluckin'." At 19, Allen moved to Nashville, bunking with his buddy Rocky Wimberley, learning the ins and outs of Music City.

"I remember waking up about 9am, walking downstairs and looking around, and Rocky's like, 'Hey, how's it going? Let's write a song,'" recalls Allen. "I'd be like, 'OK,' and he'd fix a red drink and hand it to me. I was like, 'You've got to be kidding me. I've never drank this early.' Just every morning, that's what we did. It was natural."

Natural, maybe, but not so productive.

"That right there taught me the best lesson in the world – that I can't drink and write at the same time," he continues. "If I drink more than one beer and try to write songs, I get lazy. I'm like, 'Let's go party. I want to go float the river.'"

While in Nashville, Allen says he "signed more deals than I could shake a stick at," but he managed to escape without any permanent damage. Much wiser, he came back to Houston, where he met his wife and current road manager, Holly, spent another six months in Nashville, and wound up back home in time for "Lucky Arms" to jump-start his career. Now, when he's not fishing, floating, playing golf, producing his friends Texas Renegade, or going to church with Holly, he's thinking about recording a live album or maybe making a gospel album with his dad. There was a spell lately when he felt like he was foundering a bit, but breaking in a new band has given him a second wind.

"I'll have one really good night, and it changes everything," says Allen, who's fond of making up songs onstage (and good at it). "I might get a new song idea, and it totally refreshes me. It's like drinking a glass of water after you haven't had any in a week. One little idea, man, sets me on fire."

Jason Allen, country, honky-tonk, Lucky Arms, Your Heart Turned Left (and I Was on the Right), Something I Dreamed, Wouldn't It Be Nice