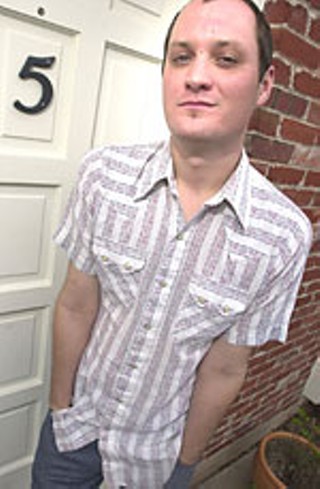 Morrissey-mad Austin tunesmith Shane Bartell might consider adding some Rick Nelson to his repertoire – he's a travelin' man, and then some. Just back from Philadelphia, where he played a radio conference and discovered an after-hours speakeasy called the Pit, and on his way to the Kerrville Folk Festival, which he attends every year, Bartell continues holding down Wednesdays at Ego's with his band Love Seat. "I think people forgot we were there for a while," he figures. Catch them when you can: Bartell plans on spending parts of June and August, and most of July, on the road, leading up to Seattle-based label Sarathan's September re-release of his 2004 album, Too Soon to Say, with new artwork and two songs from his 2001 debut EP, Reference. Since Too Soon sold out its first and only pressing ("I don't even have one"), Bartell is cobbling together a disc of unreleased material – live recordings, demos, covers, rehearsals, etc. – to sell on tour. When he gets back, Bartell hopes to begin recording a proper follow-up, which he says will be more upbeat than his past melancholy musings. He even dares to drop the word "disco." "No more crying-in-your-beer shit for a while," he promises.

Last glimpsed shaking apart the Room 710 balcony, to the detriment of bassist Win Wallace's rib cage, rampaging local septet Gorch Fock may have finally found a venue big enough to contain them: the spacious hangar at the old airport that now houses the Lone Star Rollergirls. Stars-and-stripes-clad frontman Joey Ficklin commenced last Sunday's bout with a solo trombone rendition of "The Star-Spangled Banner," then the band spelled the defending champion Holy Rollers' thrashing of the Cherry Bombs with a thunderous halftime set. It was the Fockers' first local appearance since returning from an eventful East Coast tour, which found Gibby Haynes checking out their show with the Heroine Sheiks in New York, and an unnamed member cooling his heels in a Washington, D.C., lock-up after attempting to douse his own member in 151 and set it ablaze to protest the club's miserly "pull door" practice of only giving money to those bands that patrons expressly say they're there to see. (Ultimately, no charges were filed.) Amid all this excitement, famous British label Rough Trade picked up GF's Lying and Manipulating for UK release, and their own label, Australian Cattle God, has several on tap: 2004's previously self-released Gorch Fock debut, and August West Coast tour partners Tia Carrera's November Session LP, both due in June. Also, new ACG addition Attack Formation's next LP, Somebody as Anybody, will be out Aug. 9.

Spend enough time with portly Small Stars manager Vic Odin, and you can practically see the wheels turning in his head, thinking up new ways to, as he sings on their LP 8 Stereo 8, "Turn Music Into Money." Odin and the Stars' latest gambit is Saturday and Sunday's Cabaret Z turn at Zach Scott Theater, which Odin promises will reveal more of frontman Guy Fantasy's backstory through new songs like "Guy's Lament." Another key plot point, he adds, is Odin absconding with a sizable portion of the Stars' receipts. "I have a gambling habit and a coke habit, so I'm always being chased by some dealer," he says. When not in the bathroom or at the track, Odin has wheeled and dealed his way to a possible Small Stars movie by DiG! director Ondi Timoner – "She sees it as a good way to speak out about the music business" – and a partnership between the band and local animation crew Horseback Salad to pitch a series for the Cartoon Network's popular nighttime Adult Swim programming bloc. It would basically be an animated account of the Stars' daily life, Odin explains, including Fantasy's day job at the Reno, Nev., Megamart, and would definitely include a rival band "like Jem & the Holograms versus the Misfits." Besides stumping for cigar-chomping gubernatorial candidate Kinky Friedman soon at Threadgill's World Headquarters with Billy Joe Shaver and Jerry Jeff Walker ("We're all about anything kinky"), the Stars begin a happy-hour residency at the Continental Club tonight (Thursday). They'd like to include regulars like acerbic comedian Vinnie Lombardi and fire-manipulating prestidigitator Magic Mike in the show, but, sighs Odin, "Steve [CC owner Wertheimer] says no fire."

THE ENDS: Beerland's nominal house band back with a vengeance.

SONS OF HERCULES: Never "Too Late" for the San Antonio standbys, tougher than leather and tighter than ever. 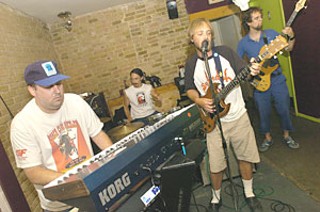 Bugs and Landlords at Plush (Photo By John Anderson)

• It's been déjà vu at Seventh and Red River the past few weeks, as Plush, once the legendary Blue Flamingo, now enlivens Monday nights with instrumental, psych, and experimental bands like the Blend and Transmography. The bar, otherwise the province of hip-hop DJs since the late Nineties, hosts Mongo Like Candy Monday and Bohemian Grove Disco June 13.

• Who needs music when you've got 40 decks and Lake Travis sunsets? The Oasis, home to such local roots acts as Asleep at the Wheel, Weary Boys, and Billy Joe Shaver, was destroyed during the early morning hours of Wednesday in a blaze local authorities believe was touched off by lightning. According to the Statesman, owner Beau Theriot promises to rebuild the Austin landmark, well into its third decade of operation, and while Noel and Liam Gallagher are headed to this year's ACL Music Festival, the real Oasis comeback remains future-bound.

• TCB and the good folks at Channel 102.3FM have teamed up for Texas Flood, our brand-new show that starts this weekend. Join TCB and Channel's Alex Hall Sundays at 9pm for an hour of Austin's finest music past, present, and future – 13th Floor Elevators to Okkervil River – and stick around for Little Steven's Underground Garage afterward.

• The SIMS Foundation is hosting a 10th-anniversary memorial for its namesake, Sims Ellison, the Pariah bassist whose 1995 suicide prompted the organization's founding, Monday at Stubb's, 8-11pm. SIMS would also like to remind local musicians that spots are still available in its health-insurance provider Health Alliance for Austin Musicians; indeed, some people who have shown up to apply have been approved on the spot. For more info on either the reception or HAAM, call SIMS at 472-1008.

• Countryman, the Willie Nelson reggae album that has spawned almost as many prospective release dates as cheap pot jokes, has cleared its last bit of red tape and will be out Aug. 2 on Lost Highway records. Appropriately for an album begun nearly a decade ago, it includes a cover of Jimmy Cliff's "Sitting in Limbo," plus songs co-written with pals Ray Price and Hank Cochran, and a duet with Maytals main man Toots Hibbert.

• Air-punching Austin rockers At All Cost had their equipment trailer (license number 78XYXG) stolen last week, losing thousands of dollars of gear. Anyone with information, please contact the band at xatallcostx@hotmail.com or 773-2501.