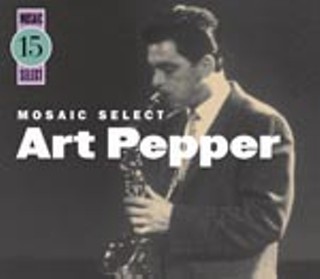 Art Pepper's 1979 autobiography Straight Life made him one of the world's most well-known jazz musicians. He deserved the acclaim; he'd been a terrific alto saxophonist in the L.A. area for decades. Now Mosaic Records has released a 3-CD set that makes some of Pepper's finest recordings, cut 1956-1957 for a few small record companies, available. At that time, Pepper had everything going for him. His style was an original synthesis of Lester Young, Charlie Parker, and Lee Konitz. He had excellent time and technique, enabling him to swing infectiously, and a pretty, brief tone and steady flow of ideas, which made him an outstanding balladeer. Everything on this set is a pleasure to listen to, but particularly the second CD. He's accompanied by the extremely simpatico rhythm section of pianist Russ Freeman, bassist Ben Tucker, and drummer Chuck Flores. These guys display wonderful collective good taste, giving Pepper infectious support but never getting in his way. As a result the group cut several masterpieces. Disc two is filled out by some lovely selections Pepper cut with tenorman Bill Perkins for Pacific Jazz. Pepper continues his high level of improvising on the other two discs, although his band isn't quite so sympathetic. On one CD, Pepper appears in the front line with trumpeter Jack Sheldon, a competent but not original stylist. On the third CD, Pepper works with the fine young pianist Carl Perkins, whose solo work is forceful and imaginative, though his rather dissonant, percussive comping isn't very complementary. Art Pepper is an essential souvenir of Fifties West Coast jazz. (This box can only be obtained directly from Mosaic Records, 35 Melrose Place, Stamford, Ct. 06902; 203/327-7111.)