An alliance long past overdue, locals MC Bavu Blakes and DJ Baby G bond like Crazy Glue on their Blazing Saddles mix disc. Reinforcing some of Blakes' originals, an armory of black-market instrumentals are freestyled with verses altering their intent. Dispersing his quick-witted baritone amidst brief vocal stabs culled from Scarface's "Recognize" and Devin the Dude's "Anything," Blakes juxtaposes himself as an unsigned veteran standing alongside the most respected figures in Texas rap. Pushing the envelope one step further, Blakes localizes the controversial spit of Jadakiss by asking, "Why did Bush knock down the towers? Why did Rapid Ric's stock shoot up after Austin Powers?" 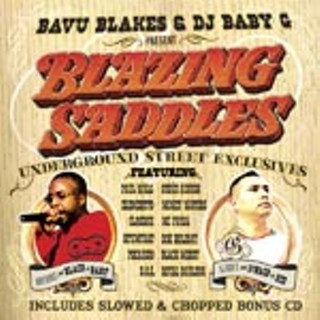 Tackling Austin issues with a fearlessness that fuels the literary tinge of his editorials, Blakes teams with MC Fatal on "Stay Strong" to deliver a first-person narrative of the Jesse Lee Owens homicide.

"On one side of the city where it's Justin and Britney, cops'll look at you pretty, crack a joke and be witty. But on the other side of town, where they slow down they 50 Cent, the tension, you feelin' it cause your guilty 'til innocent. ... Look at the way he watch me, he ain't turn his lights on or pull me over when he got me. He ain't even stop me, pulled up right beside me, on my driver's side, reachin' in my ride tryna pop me. Back on the other side of the city, it's little dilemma. They in the same clothes, similar truck, same spinners; the laws that let 'em make it, just manmade sinners that's able to raise Cain, discriminate us and kill us. The lawyers won't defend us for real without some millions. This one gon' pass before long so I stay strong."

Powerful in execution, the sharp tongues of Blazing Saddles become even more pointed in their precise placement within the production. Harking back to his 1990 DMC title as a former national champion DJ, Baby G reiterates that he and Blakes are originally from Dallas by serving up Ron C's classic proto-Screw cut "Trendsetter." Bridging the gap between I-35 off-ramps, guest appearances by Steve Austin, Ntymydat, Element7D, Dok Holiday, and D.O.S. swing back and forth between variant styles like a JanSport balancing an opened quart of lean in its pocket. Spilling over with mesmeric substance, it doesn't take the companion "Slowed and Chopped" version of the disc to feel the creeping buzz of Blakes' "Play the Role" remix, featuring Paul Wall and Money Waters.

Showcasing the versatility and prowess of an entire trans-Texas fellowship as formulated by two of the state's most sought-after underground assets, Blazing Saddles defines a moment in time within the deepest recesses of hip-hop. As Baby G spreads a canvas across the cave walls of convention, his lyrical counterpart fills in the blanks as to what role he's currently playing. "It's Mr. Blakes comma space to the capital B, a Kanye South-West for the rap industry."