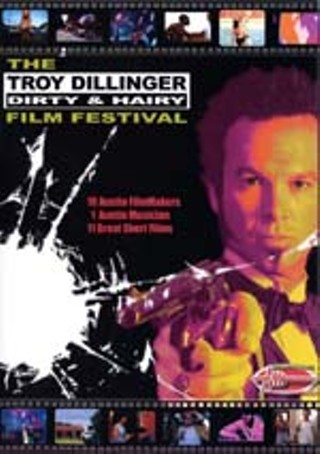 Winner of this year's Austin Music Award for Best Video/DVD, Dirty & Hairy is impressive both as an undertaking – area merchants donated goods, locations, and/or services – and as a cockeyed journal of the everyday musical ne'er-do-well. Eleven short films commissioned by longtime local rocker Troy Dillinger to accompany his latest LP, the individual pieces vary wildly in conception and production, from Dillinger's adaptation of Raymond Carver's "Intimacy" to a montage of old photos and public-access footage, including an ill-fated AMN appearance where Dillinger throws down his guitar and storms off camera. "Leavin' This Evenin'" and "Pencil Me In" each offer a giant wink at stereotypical musician behavior: hotel-room parties and relationships on the fly. Others center on the eternal alone-in-a-crowd theme: a doll-like effigy of Dillinger "walks" around the city in "Surrender," while the real thing bemoans his invisibility to his would-be sweetheart while following her around downtown, South Congress, and Hyde Park on "Strong Arms." "Candle Shop" sets love among knickknacks, and "Just 'Cuz" sends up amateur porn while offering a bevy of lingerie-clad beauties rebuffing Dillinger in various wage-earner guises (pizza guy, pool cleaner, etc.). The songs serve their settings, and the echo-laden Bowie/U2 feel of "I Got to Love You" and earthy grind of "Just 'Cuz" stand up well on their own. Funny, resourceful, and occasionally poignant, Dirty and Hairy might just make your day.