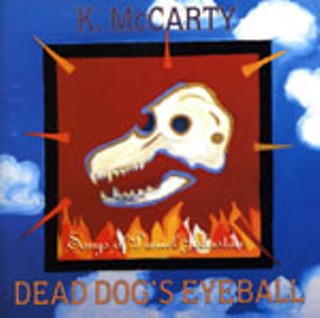 This is the album that made it impossible for anyone to dismiss Daniel Johnston as just another outsider artist. Even as an ever-growing number of marquee artists cover his songs, Kathy McCarty's Dead Dog's Eyeball, originally released in 1994, remains the premier articulation of Johnston's songwriting prowess more than a decade after its initial release. Consequently, it also makes the short list for best local album of the Nineties. One of Johnston's earliest champions during her tenure with Glass Eye, guitarist/vocalist McCarty heard uncommon breadth lurking just beneath the rudimentary instrumentation and tape hiss of Songs of Pain and Hi, How Are You. One way to hear Dead Dog's Eyeball is as McCarty's attempt to deliver these songs to a parallel pop paradise Johnston himself may well have envisioned when writing them. In the hands of McCarty and producer/multi-instrumentalist Brian Beattie, "Rocketship" becomes an indie-scale anthem in the vein of "Space Oddity," while "Sorry Entertainer" riffs on "Peter Gunn" in a playful state of sleepless delirium. Perhaps even more crucial to this album's lasting sense of endearment is the fact that McCarty's interpretations of Johnston's songs are unwaveringly configured to zero in on their respective essences. This might involve anything from the full-figured western gothic arrangement given to "Walking the Cow" to the restroom sink that serves as sole instrumentation on "Running Water." McCarty manages to find and mine the (nearly) Southern rock aspirations of "Wild West Virginia," the Beatles-leaning psychedelia of "Oh No!" and the Tin Pan Alley-style balladry of "Desperate Man Blues." On a more emotional level, her version of "Living Life" taps a universal longing most of us can't quite put words to. After years of being out of print, the reissued Eyeball adds three bonus tracks, including the anxiety-salving "Worried Shoes," along with three seldom-seen videos. No serious Austin music collection should be without it.