Treatin' 'Em Right Since '69: A Tribute to Handsome Joel Svatek 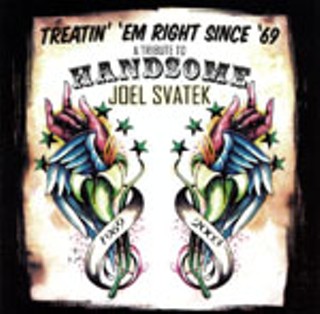 Treatin' 'Em Right Since '69: A Tribute to Handsome Joel Svatek

Red River wept on Jan. 29, 2003, when its unofficial mayor, "Handsome" Joel Svatek, sustained fatal injuries after being rear-ended by a drunk driver. Even in death, Joel casts a long shadow over the "dogleg" where he spent so many nights, as illustrated wonderfully by Arclight Records' 2-CD tribute. Dominated by the sludgy, lumbering backwoods rock Joel favored, but nearly stolen by Holy Happy Hour Charlie's acoustic epitaph, "The Show Goes On," Treatin' 'Em Right was assembled with care and it shows. Heavy music is never heavier than when confronting the loss of a friend, and many songs, notably Dixie Witch's "Here Today, Gone Tomorrow," Magnet School's "LOTL," and Brewtality Inc.'s "The King of Red River," address the tragedy and/or Joel's life directly. Others are more oblique but no less powerful: Drunken Thunder's bluesy lament "Don't Answer the Phone," and Tia Carrera turning the Beatles' "While My Guitar Gently Weeps" into eight minutes of squalling eulogy. What little levity there is comes from Joel himself via his KAOS radio air breaks; the highest praise he could bestow upon a band like Mastodon or Honky, both included here, was that they "fuckin' rocked." Handsome Joel fuckin' rocked too, and Red River remembers.