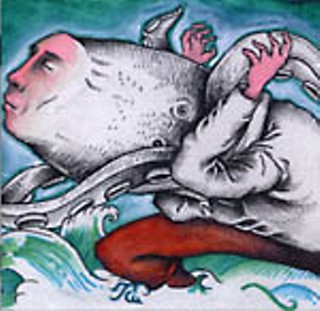 "The black sheep boy grows horns, breathing smoke through his microphone," sings Will Sheff on "So Come Back, I Am Waiting." A similarly horned figure lurks on the cover and in the liner notes of Black Sheep Boy, as well as the cover of this very Chronicle, all images perpetrated by longtime Okkervil River collaborator William Schaff. Trained at the Maryland Institute College of Art, the Rhode Island-based Schaff has illustrated the past three Okkervil River discs while also providing art for Songs: Ohia and Godspeed You! Black Emperor.

"Okkervil River has been one of my biggest benefactors and publicly vocal supporters," writes Schaff (www.williamschaff.com) in an e-mail, describing the process by which he came upon the album's images. "Will told me a bit about this idea of the Black Sheep Boy, sending me lyrics and whatnot.

"While the content of the Black Sheep Boy artwork is different from most of my work, there's a similar theme. I hoped to show a certain love and compassion I feel for those who hurt because of others. I hope that through creating my art, I can someday understand why it is people feel so compelled to hurt each other. I certainly got the feeling from the album." 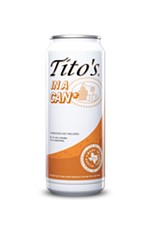 Tito’s Latest Product Is an Empty Can
Why? Because they can