Will Sheff (Photo By Mary Sledd)

in sweet moans, in each dead bed, and empty home,

in each seething bacterium.

Killing softly and serial, he lifts his head,

He's the thrill of the abecedarian.

(See the muddy hoofprints where he carried you?)

Seven years have passed since Okkervil River humbly shuffled onto the Austin music scene with their self-released Bedroom EP. Since then, the longtime friends have released three full-length albums, each one better than the last, positioning themselves on the national scene as a beloved cult act. While the group has inspired a devoted and passionate following, they've also run the indie steeplechase: personnel changes (founding guitarist Seth Warren has moved on, as has original drummer Mark Pedini), money troubles, and the labors of consistent touring, a long procession of sleeping on linoleum floors, shabby door receipts, and general collective misery.

Now, with Black Sheep Boy (Jagjaguwar), Okkervil River has reached a critical point in its evolution, one that's poised the band on the brink of notoriety and success. The secret lies in frontman Will Sheff's songwriting, which has matured in exponential leaps with each new release. All the while, Sheff's public persona has taken on its own distinct shape. He's a writer (contributing to the Chronicle), musician, and video clerk. A thinker. Anyone keeping track has witnessed the trajectory of a postmodern Renaissance man, a frustrated aesthete, a literary (and literate) rock star in waiting. As Okkervil River has evolved as a band, Will Sheff has evolved as a man.

A string quartet plucks out Jimi Hendrix's "Purple Haze," occasionally distracting Sheff from his narrative journey through the stacks of the shiny new Half Price Books on north Lamar.

"I don't really like Hemingway, I think he's overrated," Sheff confesses. He pauses over a very used Hemingway book on the shelves. "You can tell that someone didn't just have this for some class and unloaded it as soon as they could. Someone really loved this book."

We continue trawling through the literature section, dissecting our reasons for reading (or not) D.H. Lawrence, Don DeLillo, Thomas Pynchon. Sheff snatches a copy of Tropic of Cancer. "Henry Miller is my number one," he declares shamelessly. "I know he's a rat bastard and it's not good writing, but I love it."

One of the most striking things about Will Sheff – and there are many striking things about this man – is his self-awareness. There's nothing you can't call him out on that he won't own up to. For example, there's his fashioning of himself as some sort of rock & roll Oscar Wilde. You see him at all the hippest shows, and if it's the least bit chilly outside, he's invariably clad in an artist's woolen coat with a big, handmade scarf wrapped around his neck. His hair is perpetually tousled, and he often has the look of an adult Dennis the Menace who's exchanged mischief for deep thoughts.

When he speaks publicly, you might catch a few eyes rolled at the pomposity of his language. Playing at a recent opening for artist William Schaff (see sidebar) at the jam-packed Escapist Bookstore, Sheff spewed a barrage of 50-cent words at the audience. "It's always such a relief to see that ascetic New England visage in the crowd," he announced before launching into Okkervil River's set opener. What an ass. That's when it occurs to you that everyone in that room knows exactly what all of those words mean.

"Those are 65-cent words, thank you very much," Sheff laughs, slightly embarrassed. "It's not an affectation, it's the way I talk. Sometimes I'll pass over the obvious three-letter word that I forgot and choose the five-syllable word instead because I'm a nerd. That's the only reason."

The only child of New England prep-school-teacher parents, Sheff describes his childhood as a lonely one with more books than friends. Which is probably why he struggles to wed the book-nerd persona with that of a rock singer.

Rather than consign himself to a life as "a cloistered writer," Sheff looked to his idols.

"John Lennon," he says. "He wasn't a rock star like David Bowie. He was just a guy, smart, with a lot of heart, but sort of a fuck-up."

The Walrus was also sort of a dick, something to which Sheff, who describes himself as petulant and arrogant, can relate.

"When I'm really happy, I want to share the glowing beauty of life with all those around me. When I'm unhappy, I won't abide anyone having a happy thought in their souls; I must crush it out and totally destroy any pleasant feelings they might be experiencing. "

It's obvious Sheff has spent a lot of time – maybe too much time – examining himself and his flaws. However, in a culture that eschews critical thinking and the examined life, his self-knowledge is refreshing – and a little frightening. To be so in tune with one's defects could be dangerous. Or it could be art.

And You Shall Know Them by Their Fans 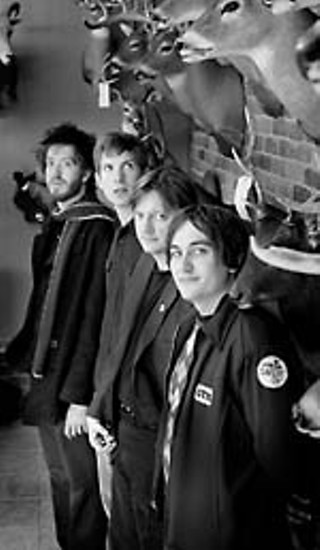 "To be in the indie world is to be extremely insecure with your own progressiveness, about your own trendiness, about how cool you might or might not look, about what your fans might be like," Sheff expounds.

This comes not long after he made an interesting comment about Charles Bukowski, or, more specifically, his readers.

"That's a case of, 'You shall know them by their fans,'" he explains. "I don't really read Bukowski because everyone I know that likes his writing is an asshole."

So what, then, can be said about Okkervil River based on the fans who go, often religiously, to see their shows? There seems to be something deeper than "hip" going on at the band's Austin shows. The same faces mingling in the audience at Emo's or the Parish are perhaps best described as the mathletes of hipsterdom, indie rockers with mortgages, if you will. There's always a ragged collection of punks, state employees, fat chicks, and video store clerks alongside the Puma-wearing gadflies. Sheff embraces this contingent.

"That's my people: intense nerds and people who get attached too easily and get hurt. People who think there's some kind of key in their hurt to who they are. Sad-sacks, true believers, dorky people, nerdy people."

He's quick to qualify this sentiment, however, unwilling to consign his work to the considerable nerd populace.

"I really think I'd be doing something wrong if the stands were filled with 98-pound weaklings and people who never see the light of the sun and not a frat guy who's sensitive, or a 40-year-old mom. I know we have fans like that, and I hope that we don't lose them. I know my songwriting is very verbose, but I don't want our music to just appeal to nerds."

Bring Okkervil River not only your tired nerds, your huddled dweeby masses, but also the chucklehead jocks with a yen for Midwestern rock and disaffected teens chomping at the bit to let their freak flag fly. There's room in the music for everyone.

"It always comes back to, for me, songs," says Sheff. "The best thing I can do is just try, in my room, to make the actual song the best that I think it possibly can be. Then, I can't worry about anything else, because it's up to fate."

The Evil That Men Do

Black Sheep Boy marks an important moment in Okkervil River's career. Based on the titular song by Sixties folk artist Tim Hardin, this fourth LP is about the evil people are capable of.

"Even people who aren't overtly evil," posits bassist Zach Thomas, partnered in Okkervil rhythm with drummer Travis Nelsen. "Just the things that people are capable of who are otherwise tax-paying citizens."

It also sounds more like Okkervil River than any of the band's previous releases. Obviously, it all comes down to Sheff's songwriting.

"I think he's grown increasingly confident with what he's doing," nods Thomas. "I thought that all the songs on [2003's] River of Golden Dreams were a real step up in terms of maturity. Black Sheep Boy is Will getting a little more obscure and being comfortable with that."

On it, Sheff is the prodigal son before his return to grace (which always remains in question) turned him into the blackest of monsters, someone with a hidden bloodlust only occasionally tempered by more tender emotions.

"Sometimes, it's baroque, and intentionally so," says Thomas. "'So Come Back, I Am Waiting' is a really huge song because it's nine minutes long but also in the scope of its themes. We certainly didn't attempt anything like it in prior records."

Where in the past Sheff balanced plaintive and bitter, on Black Sheep Boy, he plunges into the conflicting poles of humanity, good and evil, even as they struggle for dominance within one person. At times, Sheff is the Black Sheep Boy. According to Okkervil organist Jonathan Meiburg, who helms Austin's Shearwater with Sheff as a sideman, this conflict takes place within the music itself, as well.

"With [producer Brian] Beattie's help on this record, we've finally achieved a balance between bludgeoning rock and really ornate, complicated, sort of filigreed stuff," ventures Meiburg. "I think those things cutting against each other are really thrilling."

All the Okkervil River discs lead up to this new one, including 2002's revelatory full-length debut, Don't Fall in Love With Everyone You See, and last fall's dark Sleep and Wake Up Songs EP. The perfect balance has been struck, but will it help the band strike gold? Beattie thinks so.

"I feel like there's a particular aligning of the stars with Okkervil and this record," he writes in an e-mail. "It's such a good time in their musical development, and it seems like the world could possibly give a shit, given current trends. Wouldn't that be nice?"

Meiburg is more conservative in his estimation of the band's situation. "If it all ended tomorrow, I'd be satisfied because I know that this record is out there."

the heaviest weight, the clumsiest shape,

you love a stone."

Okkervil River and the Decemberists play Emo's Saturday, April 2. The Baptist Generals and Glass Family grace the inside stage.