SXSW 2005 plows a furrow of beer cans, cocaine, and music through downtown Austin SXSW 2005 faded away to the sound of thousands of cans of Miller Lite and alcoholic energy drink Sparks being crunched underfoot during the mass exodus from Saturday's Vice magazine/Adult Swim afterparty, where TCB has it on good authority at least three hand jobs were given out. Residents of East Austin artists' co-op the Rhizome Collective herded those lucky enough to get in at all – stragglers in the blocks-long line out front were handed PBR tallboys as a consolation prize – toward the exits like a hipster cattle drive.

SXSW can turn on a dime, and the throngs who moments before were bopping to England's energetic Go! Team (a mixed-gender Spice Girls fronted by the elfin cheerleader Ninja) were only too happy to return the Rhizome, and by extension all of Austin, to its rightful owners. Who were, as always, ecstatic to take it back. 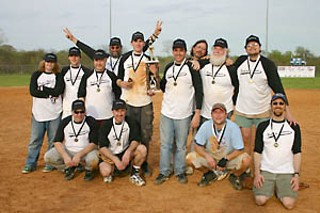 While imminent stardom likely awaits SXSWers the Futureheads, Kaiser Chiefs, and Doves, whose Thursday La Zona Rosa showcase had badge holders waiting two hours to get in, the hype machine has already begun to devour conference can't-miss Bloc Party, whom at least one witness dubbed "most overrated show." Rehab likely awaits the blockhead who dropped a $400 bag of cocaine on the floor and left it there.

To that, TCB himself, who set personal SXSW firsts of brushing his teeth in the Flamingo Cantina bathroom, getting his car towed, and losing his ATM card, would add math-metaleers Hella, former Blur guitarist Graham Coxon, By Divine Right, Austin's Good Looks and Secret Weapons, and the inimitable Blowfly. After cameras captured him autographing the posterior of some lucky se–orita, Houston "tamale king" Chingo Bling emerged to the head-nodding strains of T.I.'s hit "Bring 'Em Out," much the same way M.I.A. appropriated Ciara's "1, 2 Step" at the Vice Victory Grill party Friday, where some Texas Rollergirls playfully fondled each other in preparation (and, presumably, promotion) for their Austin Music Hall exhibition bout the next day headlined by Nashville Pussy. Heartwarmingly, several Austin acts seemed to be among the conference's most well-received. Zykos reportedly enthralled Michael Stipe at their Blender Bar showcase, and definitely had reps from UK label Fierce Panda fawning all over them at their Emo's day party Wednesday. What Made Milwaukee Famous rated a mention in Billboard's daily online diary, and I Love You but I've Chosen Darkness secured a paragraph of MTV.com coverage.

A correspondent from New York-based erotica Web site Nerve.com was sufficiently impressed by This Microwave World keyboardist Evan Lawrence's sideburns to run his picture in her blog, Jon Pareles closed out his New York Times wrap-up by lauding Los Super Seven, and Yep Roc executives were sighted singing along enthusiastically to Moonlight Towers. The news wasn't all good, though: Johnny Walker reported his long-running local rockers Ignorance Park have finally succumbed to irreconcilable musical differences, and new Bloodshot signee Scott H. Biram played the festival with a heavy heart due to the March 20 loss of his best friend Steve. Condolences.

More? OK, more: Neko Case, who had her '67 Mercury Cougar's rusted-out gas tank repaired by South Austin gearhead guru Mercury Charlie, sang a couple of songs with Calexico at their Antone's showcase… Costello and Robyn Hitchcock were sighted backstage at Emo's Wednesday, as were Flaming Lips frontman Wayne Coyne and (former?) Guided by Voices leader Bob Pollard Thursday, before a staggering Pollard had to be escorted out by his manager… Coyne was also seen at Las Manitas and the Parish, where a Dinosaur Jr. reunion fell apart at the last minute, replaced by the always-helpful Spoon… Local favorites Patricia Vonne and Ian McLagan do-si-doed to "San Antonio Rose" backstage at the Austin Music Awards Wednesday...

Closing out the insanity: Chronicle writer and News 8 Austin correspondent Andy Langer cagily moved his interview with Tristan Prettyman (girlfriend of teen dream Jason Mraz) inside at Stubb's, so as to avoid being spat on by the roving troop of "Bad News Boy Scouts"... Someone procured a packet of dirt from the grave of serial killer Ed Gein, which several people proceeded to snort off the Headhunters bar Tuesday like so much cocaine. Yes, ladies and gentlemen, it was that kind of week.