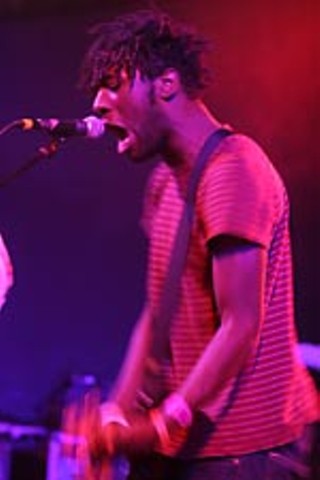 "If you've been holding back this week watching bands, now's the time to let go," said bassist Gordon Moakes after he and his Bloc Party bandmates played their first song. The Cure-ish wailing of dreadlocked guitarist/vocalist Kele Okereke indeed approached therapeutic. Bloc Party entered Friday's show at Stubb's as one of SXSW's most-hyped bands, offering much promise and almost delivering. The South London quartet's circumstance is actually similar to Franz Ferdinand's last year. They both had March 18 Austin show dates around the time their first albums were released stateside (Bloc Party's full-length, Silent Alarm, is due in stores Tuesday). They both sang about fire with sound burning like it, too. And they both make music that could fit snugly into the "exciting" genre, if it existed. While there was some energy flagging early on in what ended up seeming a short set, Bloc Party picked things up quickly in their characteristic charging and tautly wound sound. The insistent, tense guitar playing (Okereke and Russell Lissack) married well with the performance given by the shirtless, bespeckled drummer wearing a gold cross around his neck. This allowed the driven guitar of tunes like "Banquet" from last fall's EP to collapse into airplane feedback in all the right places. Bloc Party's stage presence was young, confident, and almost cocky, oftentimes finding the four members huddling around the drum kit during bridges. But that's necessary when energy is what you're selling. While Bloc Party's nothing especially new or creative considering the acts on today's radar, that really shouldn't matter. You don't have to be new or creative to make well-crafted pop – especially when your choruses get this shoutable and the chicks dig it this much.