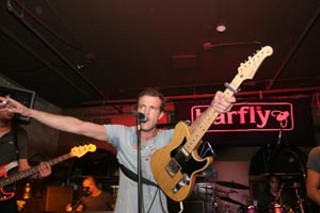 Friday's short-but-sweet set by the Crimea embraced that old showbiz adage about leaving 'em wanting more. The London-based quintet was on and off in just 30 minutes, but it was an action-packed half-hour. Vocalist/guitarist Davey MacManus is an emotive whirlwind onstage, brandishing his guitar like an assault weapon, but his manner never gets affected to the point of annoyance. Perhaps that's because the Crimea writes clever, well-developed pop songs that touch on psychedelia, glam, and goth while retaining a wholly original essence. Their default mood is simultaneously morose and majestic in the finest Brit-pop tradition. With two guitars, a rhythm section, and a pianist, their arrangements are full-bodied, too. The spoken verses of "Opposite Ends" provided a perfect showcase for MacManus' lyrical witticisms, like, "Get down off your broomstick and sweep the floor." As the song progressed, he worked his way further into a frothing caterwaul before ending with a barely audible thank you. All the knowing, bobbing heads near the front of the stage suggest the title track from last year's Lottery Winners on Acid EP is a rock anthem waiting for mass acceptance. MacManus' foggy romantic sentiments spring from the same idyllic lair that birthed Lou Reed's "Perfect Day." Any songwriter who manages to make contracting scabies sound desirable deserves a gold record. The Crimea ended with "Someone's Crying," the final song from their forthcoming Warner Bros. full-length, Tragedy Rocks. After running through an existential catalog of all the pain and suffering going on in the world at any given moment, MacManus asked, "Where was your magic, Lord? Where was your magic?" before walking off with time to spare.