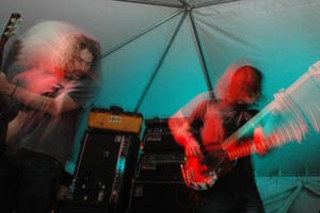 Lately, the best way for indie bands to make a buck is through film or television. Hence, Red Sparowes, a new underground instrumental metal supergroup, might quickly pull off a feat usually reserved for their more radio-friendly brethren – actually turning a profit. If their regional debut at Emo's Annex was any indication, this young, talented band has already got their sound nailed. Much lighter, crisper, and catchier than the more brooding bands that spawned them (Isis, Neurosis, and the Temporary Residence band Halifax Pier), Red Sparowes seem particularly well-suited to accompany cinematic drama. This point was underscored by the black-and-white projections that hovered above the L.A. fivepiece, abstract images of city lights and odd faces from odd angles. Opening with the standout second untitled selection from their Neurot Recordings debut, At the Soundless Dawn, Red Sparowes demonstrated immediately what Godspeed You! Black Emperor might be like if they weren't so depressing and drawn out. A rising/falling three-chord apocalyptic arc commingled with a bouncy, catchy, and downright brilliant bassline, with a mellow interlude in the middle giving way to a "once more with feeling" final run-through. The distinctive pedal steel that appears liberally on the album showed up prominently only once, but it showcased a distinctive weapon, both ominous and ornate, that their instrumental rock brethren lack. A cool evening breeze swept through the outdoor annex, brushing up against the fibers and threads of a musical web that managed to be accessible, stimulating, and occasionally on the precipice of the mystical.