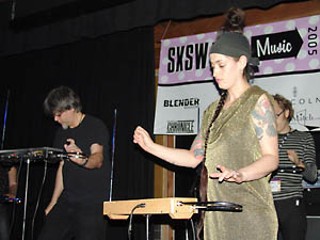 Russian physicist Leon Theremin (1896-1993) created the first electronic noisemaker in 1918, the haunting instrument bearing his name. Most wouldn't recognize a theremin if it bit them on the earlobe, but its sound, eerie and floating, is instantly recognizable, mostly from sci-fi/horror flicks and the Beach Boys' "Good Vibrations." Yet the instrument is capable of so much more, used by virtuosos for solo and concert performances. It's basically an electronic box with two metal rods, which alter pitch and volume, depending on the proximity of the player's hands. It's probably the only instrument you play by not touching it, making live performances that much more interesting. By the time the Austin Theremonic Orchestra's six players began their 8pm showcase at the Congress Avenue cafe and performance space, the venue was at capacity. Not bad for a band's third performance. Formed less than a year ago, the local sextet looked like slow-moving mannequins during their single improvised composition, with players' hands slowly quivering around their instruments. ATO's "song" didn't contain harmonic counterpoints, but neither was it atonal. More like polytonal. Especially when the theremins were run through effects processors like delay and wah-wah pedals, sounding like an alien's siren song. Easy listening this wasn't, and some in the audience left, while others who had been waiting outside filled in. Shit, half the fun was figuring out which player was making which wacked-out and ethereal sound. Not your everyday music, but it beat the hell out of the same old crappy indie guitar band.