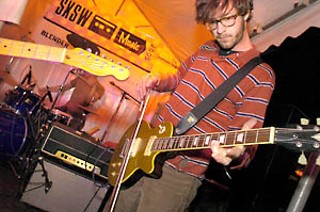 Maybe they're called Dirty on Purpose because they really know how to climax: steady, patiently. It's like they thought about it, and now they're determined to bring it there in a slow, polite tease that recalls a born-from-frustration Mogwai-Bedhead lovechild. DOP began with calm helicopter drumming and burgeoned from there in a way that makes you tap your Converse rather than gaze at them. Sweet builds are always more rewarding and pleasant, like those climbing and falling in the maraca-bottomed "Mind Blindness" and other tunes from the recently self-released Sleep Late for a Better Tomorrow. Dirty on Purpose are one girl and four boys from Brooklyn, and they look like it. Something extra happens when stylishly garbed pretty people make good music. Bangs in her eyes, model-esque keyboardist Erika Forster is pleasing to watch as she plays with knobs and does tricks with volume. She shared vocal duties with a chiseled drummer and a slight, friendly guitarist some people in the audience called "so endearing" after he mused awkwardly over the Sixth Street Jesus pamphlet thrust upon him before the show. Cardboard-boxed rhythms and distorted guitar dominated their steady, multilayered, undulating structure that usually endured until it couldn't help but settle into a sweet, sprinkling guitar or soft tambourine. Their fuzzy poppiness and bittersweet understatement certainly celebrated a Yo La Tengo and Jesus & Mary Chain nostalgia but didn't seem at all like half-assed derivation. However, one gets the feeling their sarcastic lyric-sound contrast ("We burned your body and spread the ashes") might be more intelligible and complete on disc. Perhaps a full-length album is in order before the itch is truly scratched.