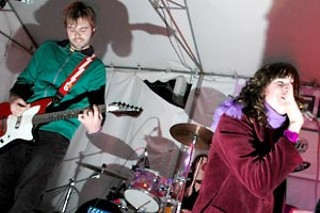 Hearing music that puts a mirror up to your very soul is all well and good, but sometimes you just want to hear something silly that makes you smile. The Grates definitely hail from the latter school of thought. With just guitar, drums, and an ebulliently spry singer, the Brisbane, Australia, trio rocked the house like it was a high school basement party. Furrowed brows might be inclined to write the Grates off as a mere derivation of the Yeah Yeah Yeahs. Indeed, vocalist Patience Hodgson does occasionally indulge in Karen O's warbling tonalities, but it's coming from a much kookier, less maniacal place. She may be odd, but it's a good-natured kind of odd. As Hodgson twists, flails, and giggles her way across the stage in the spirit of high-energy, bop-happy fun, guitarist John Patterson holds it down with no-muss pop minimalism. Meanwhile, drummer Alana Skyring pounds out solid tribal beats that belie her smallish frame. Recorded at home as a demo, the Grates' four-song EP, The Ouch. The Touch, has caused quite a stir in their native land, with "Trampoline" being used for a jeans commercial. Despite its lo-fi, Heavens to Betsy pedigree, Hodgson's coquettish exhortation to "use your bed like a trampoline" was impossible to resist. The only halfway serious moment of the night was watching Hodgson jump up and down and wondering if she was about to crack her head open on a low-hanging overhead light.