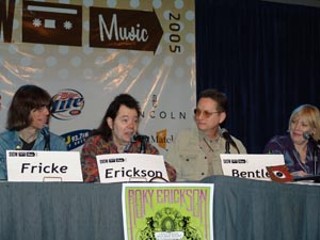 Roky Erickson and the 13th Floor Elevators were psychedelic pioneers who got scalped on many levels. If Texas music mavens seem eager to champion their legacy today, perhaps it's to make amends for the years in which seeking enlightenment made them a target in this state. To hear native son turned Warner Bros. Records exec Bill Bentley tell it, the Elevators were heroes in his own back yard. "We'd always looked outside of Texas to find great music," he said. "The 13th Floor Elevators completely changed how we thought about ourselves." In addition to Erickson, the panel featured Elevators bassists Benny Thurman and Ronnie Leatherman, drummer John Ike Walton, and songwriter Powell St. John. Thurman and Walton were playing with Stacy Sutherland, the Elevators' guitarist who was shot and killed in 1978, in a Port Aransas surf band called the Lingsmen. Erickson was playing "fraternity music" in Austin with the Spades, and St. John was playing folk music. They all came together under the auspices of jug player/lyricist/spiritual guide Tommy Hall. According to Erickson, "The music took over. It was like we wouldn't even have to touch our instruments." Rolling Stone senior editor David Fricke pointed out that the Grateful Dead didn't even have a record deal when "You're Gonna Miss Me" became a hit. "To actually hear 'You're Gonna Miss Me' on the radio in Philadelphia in 1966 was an extraordinary experience," Fricke recalled. "No one else had taken the quest for enlightenment that far." Erickson's commitment to Rusk State Hospital and the Elevators' sad downfall were touched upon, but the panel's primary focus was defining the group's formidable legacy. Sumner Erickson, Roky's brother and caretaker, noted a local restaurant sending back their check marked 'APD Discount,' a far cry from the days when the Elevators were regularly shadowed by squad cars.