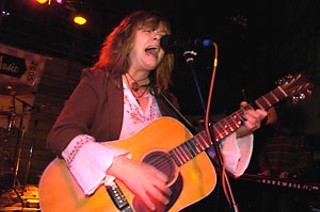 The last time most folks caught Susan Cowsill onstage was with the late and seriously lamented Continental Drifters, a band she fronted with her ex-husband Peter Holsapple along with ex-Bangle Vicki Peterson. With this performance, she crowned herself "a debutante at 45." Cowsill recently put out her first solo album, Just Believe It, and with her new fivepiece, she displayed her own manner of doing things. In fact, her sound wasn't that far removed from what she brought to the Drifters, a big heart leavened with spunky spirit. The set started a little slow with some indistinct singer-songwriter fare, but over the course of 40 minutes she rambled through a few different and well-played styles. It was all highlighted by her strong and bright vocals, which sailed over an, at times, muddy instrumental mix. Cowsill hit her stride on "The Rain Song," which has been covered by the Bangles and Hootie & the Blowfish, a forceful and gutsy performance. Next was a song featuring Lucinda Williams on her new disc, an Americana-laced ballad that recalled Williams' mournful side with the use of accordion and mandolin. Then the dark-haired Cowsill revealed a rock stance with a couple of guitar-heavy tunes that brought to mind the rougher side of Sheryl Crow. At set's end she garnered a well-deserved roar of approval from the impressive crowd that had gathered.