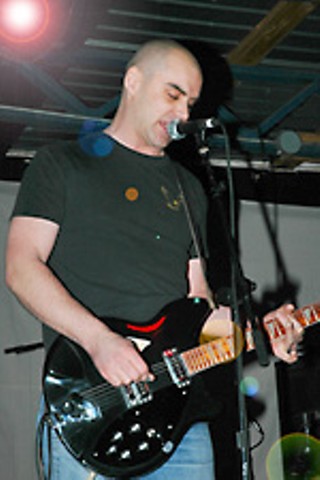 As the title of their Sub Pop debut admits, the A Frames are heavy. And dark. And creepy. Black Forest is yet more evidence that robots are stealthily replacing humans, or so singer-guitarist Erin Sullivan would have the masses believe. On Forest, his monotone vox clash with his own dynamic, thrashing guitar work, jabbing in and out of bassist Min Yee's throbbing bass and drummer Lars Finberg's assembly-line drums. Live, the A Frames pay their dues to influences like the Cows, Joy Division, and Austin's own Scratch Acid, making a beautiful mess out of chaos. Songs like "Experiment," "Eva Braun," and opener "Memoranda" are total contradictions. They're dancey yet creepy. Atonal. Out of tune. Parasitic. And somehow, that's okay. The A Frames take comfort in your auditory discomfort. On the title track, Sullivan declares, "Humanity is erased, black forest left in its place," over a pummeling bassline and buzzsaw guitar. As you're bobbing your head up and down, you suddenly realize these guys are ready to annihilate the whole planet with a single distorted note, and that one day your identity could be just a bar code. Then, without warning, the song ends and the next Teutonic rant begins. The A Frames may espouse the evils of corporate America, pollution, war, death, but it's a death you can dance to.