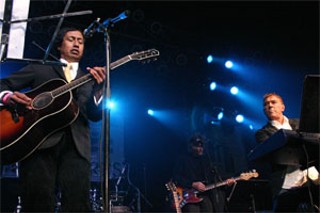 Austin has run a marathon in the last 23 years. From the Drag to Sixth Street. From hippies to hipsters. From Slackerville to the Live Music Capital of the World. Despite our 21st-century evolutions and our technological reputation, one thing will forever remain as the foundation of our little community. Set in the concrete along with tolerance, open-mindedness, and love for the common man is tradition. 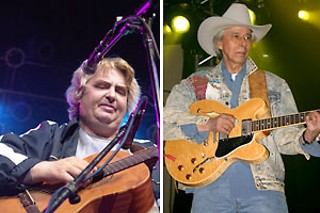 Without tradition, Austin would be just as industrial as Houston and just as greedy as Dallas. From UT to Red River, glowing reminders of our forebears make themselves known. Austin punk rock institution the Big Boys graced the Austin Music Awards in the early Eighties, but tonight went beyond Austin history straight into the ever-evolving abyss: the history of rock & roll. The 2004-05 Austin Music Awards brought with it the sounds of Texas. The Fifties crossover from blues to rock. The Nineties renaissance of the poet. The beating heart of the Texas cowboy. And the fun-loving heart of Austin music fans.

With the ubiquitous Paul Ray manning the mic, the night was born from the rugged face of 91-year-old bluesman Pinetop Perkins. Drawn to Austin perhaps by good friend and Austin institution in his own right Clifford Antone, Perkins was welcomed with open arms. His black Stetson shadowing his frail physique, Perkins rolled the blues slowly, his elongated fingers gracing the ivories with a mind of their own, until segueing into a rollicking boogie, his trademark. As the tempo rose, so did the anticipation. And it showed. 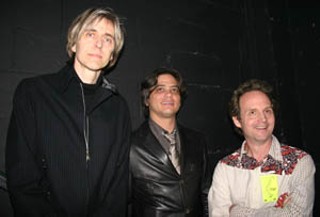 After Perkins' brief opening, the crowd chatted like 12-year-olds after a first kiss, only pausing to applaud after every award. The masked Dirty Wormz took the stage for Best Hip-Hop – the second strangest outfits of the evening – followed by Best All-Ages Club Emo's absence, explained by their SXSW showcases. After Warehouse District alterna-rockers Wideawake swept the rock, pop, male vocalist, and songwriter categories, the energy changed.

Beloved Austinite (by way of Waller) Daniel Johnston shuffled onstage, his hoodie zipped up only a couple of inches and his bangs swaying haphazardly in his eyes. Somehow in front of a hall full of people, the middle-aged man became a lonely child playing in a darkened basement with only a toy six-string in hand. That naïveté and vulnerability is Johnston's strong suit, and had the Austin Music Hall been acoustically kind or had the crowd hushed, the Late Great Daniel Johnston's influence could've been physically felt. Instead, the invisible poet quietly glanced at his music stand and recited word for word his anguish through the massive PA. As quickly as he had shimmied on stage, Johnston returned to the darkness where he feels more comfortable.

"I'm thankful for overproduced pop music," KISS 96.7FM's Bobby Bones, winner of Best Radio Personality, jabbed just prior to thanking Clear Channel and corporate America. The crowd hissed Clear Channel as if it were presidential, and Bones scampered away.

"How many Austinites does it take to change a light bulb?" KGSR's Susan Castle forced. "Ten: one to change it and nine to tell him how cool the old light bulb was." Along with tradition resides stubbornness. An insurmountable check in the amount of $190,000 was presented from Austin's favorite radio station to the SIMS Foundation, a generous gift from an ingenious company.

Velvet Undergrounder John Cale and True Believer Alejandro Escovedo fronted a symphony to the delight of onlookers both local and otherwise. The first band to garner the crowd's undivided attention, Cale and Escovedo traded ballads and heartbreaks before exploding into "Hallelujah," more powerful than Buckley, more tender than Cohen. Cale's Tony Bennett is as potent as Escovedo's bleeding heart. And fortunate for the wise rockers, in the war of decibels, the mic always wins.

As the Hardcore Country All-Stars took the stage, Alvin Crow, with his red boots and sequined vest, reminded what state we're in, from the "Prisoner's Song" to "T for Texas," and with Patricia Vonne providing the alto on "Honky Tonk Angels," the crowd fell in love.

Los Lonely Boys' Ringo Garza and 13th Floor Elevators' immortal Roky Erickson both received standing ovations, the most deserving of the night, and Texas' heart beat even harder as Sonny Curtis and Nanci Griffith along with the remaining Crickets strolled on.

"Oh Boy" doesn't have quite the kick it did in '58, but it still stretches the grins with Curtis' giddiness gliding along with the bouncy riff. "Love Is All Around" leaps off the Music Hall walls, providing the bridge from Buddy Holly's Crickets of the Fifties to John Cale's VU of the Sixties.

It all comes around. We are blessed to have this kind of sincere talent stalking our stages. Tonight was a reminder and a gift from the past to the future, because no matter how much this little town changes, inside we all revere our roots.