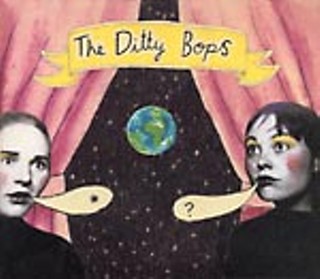 Combining a magical attic's worth of dusty musical idioms, iridescent golden harmonies, and a quirk-laden lyrical worldview, the Ditty Bops provide a refreshing antidote to the misbegotten, soul-grinding notion of thinking you know what happens next. Against the backdrop of this alternate reality, it's entirely appropriate the L.A. duo wound up with a major label contract after just eight public performances. Abby DeWald (guitar) and Amanda Barrett (mandolin/dulcimer) embody the simple Saturday afternoon pleasures – of thrift store finds and getting lost in the library – with their amalgam of ragtime, jazz, vaudeville, Western swing, and folk, but it would sell the Bops short to lump them in with nostalgia-driven absolutists. Their opening statement, "Walk or Ride," is a gently swinging children's lullaby that could've been written by They Might Be Giants and sung by the Andrews Sisters. As such, it's easy to imagine parental anxiety arising from a lyric like "When you stomp your feet, you aren't hurting me, but you're always killing something just by living on the earth." By contrast, their rollicking cover of the New Orleans jazz standard "I Wish I Could Shimmy Like My Sister Kate" should please just about anything with a pulse. Mitchell Froom's tasteful production accentuates DeWald and Barrett without overriding them. It could be said the Ditty Bops are sometimes a little too clever for their own good, but only a right bastard would let that ruin the parade. (Friday, March 18, 11pm @ 18th Floor @ Crowne Plaza)