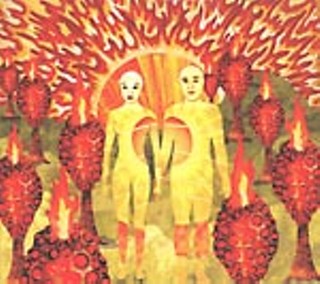 Ah, the chair dance. It's rarely seen by the innocent spectator; rather, it's performed in the privacy of one's home or office (variations of it exist in traffic and/or in the bank of elliptical machines at the gym). It takes a lot to inspire the chair dance, a cosmic conflagration of elevated mood and ticklish music that exists only to get those dance-related synapses firing. Such is the case with Of Montreal's The Sunlandic Twins, the prolific Athens, Ga., group's ninth album in eight years. One of the last few authentic Elephant 6 bands working these days, Kevin Barnes and his cohorts seem to be veering away from the light, getting stronger rather than petering out like so many of their peers, yet retaining the quintessential Elephant 6 sound. Take "I Was Never Young," which marries baroque Beach Boys harmonies with layered dance beats and various tempo changes, while "The Party's Crashing Us" is a synth-heavy slice of nostalgia. "Forecast Fascist Future" is paranoid and vaguely political, yet incredibly catchy. Every song has a precise trajectory, discernible sections, and its own distinct personality and mood. Some might write off this album as a collection of novelty work à la Ween, but there's more going on here than being goofy for goofiness' sake. There's a sense of testing artistic boundaries to letting that inner band geek/video-game junkie call the shots. The result isn't only pure imagination, it's guaranteed to inspire the chair dance every time. (Friday, March 18, 1am @ Friends)