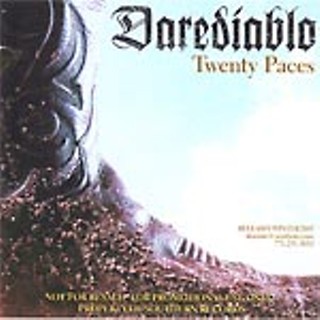 A decade and more ago, instrumental guitar discs collapsed under the weight of shredding, not storytelling. Even in jazz, chops trump character development. No such pitfalls for New York organ trio Darediablo, who went to film school. Opening on the title track of their fifth release, the Terry Gilliam-like CD cover comes to life like Time Bandits. In the midst of chaos, a tease of Sergio Leone howls, just in case you missed the drum beat counting off paces as guitar and organ duel it out like wily old gunfighters. When all hell finally breaks loose, the guitar having lived to crow about it, this 51Ú2 minute film has just about paid the price of admission. Its stomping, scratching follow-up, "Apache Chicken," launches a hail of arrows. "The Bells of Goliad" ring in epic waves, rippling into the organ and drum drama "Billy Got Worse." "Nite Fite on Wife Nite" features guitarist Jake Garcia's yakety yak and Matt Holford's shrill answer, the overall effect being like your average shower that ends with Janet Leigh eyeballing the drain. Drummer Chad Royce cameos Hitch. "Lonely Is the Stranger in the Rainbow of the Heat of the Still of the Night" almost goes Whitesnake one better, while closer "French Exit" is the perfect bookend to Twenty Paces, 11 serial installments that feel like you just spent the afternoon in a darkened theatre ducking bullets. (Friday, March 18, 11pm @ Velvet Spade)