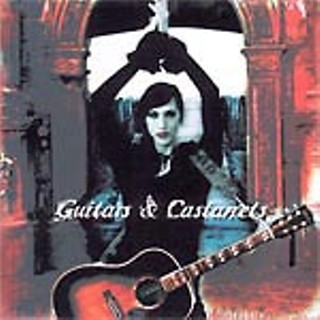 With Guitars & Castanets, her second album, Austin's Patricia Vonne has sidestepped the all-encompassing sophomore slump and is confidently walking a bold line between contemporary Mexican and traditional rock & roll. Call it Texas border rock, though border suggests a line of demarcation Vonne's songs don't have; she doesn't follow borders, she takes long-legged strides over them. The seamless flow of 11 tracks (the last is a bonus, the exquisite "Traeme Paz" from Once Upon a Time in Mexico) is like a swiftly moving river passing through ever-changing terrain. "Here comes the bride, all dressed in white!" Vonne warns as Charlie Sexton's wicked guitar slashes through the opening of "Rebel Bride," and the singer assumes the role of a pistola-packin' mamasita armed and out for her man. It's not only Vonne's lustiest tune, it showcases her voice at its rocking best. Guitars balances bilingual ("Fiesta Sangria," "La Gitana de Triana") with beat ("Lonesome Rider," "Blood on the Tracks") and is rife with tributes to Vonne's many influences, like Joe Ely ("Joe's Gone Ridin'"), Johnny Reno ("Sax Maniac"), and most poignantly to Alejandro Escovedo, with the title track "Guitarras y Casta–uelas." Much of Guitars' organic comfort lies in the expert musicianship within, particularly Carl Thiel at the production helm. Vonne's husband, co-writer, and accompanist Robert LaRoche provides acoustic guitar flourishes integral to her castanet-driven live shows. The caliente combination of Latino rhythm and American rock & roll has been well explored by everyone from Doug Sahm to Los Cruzados, yet Patricia Vonne's Guitars & Castanets is more stylized, a feminine, sensual rendering. Romance and rock & roll rarely sound so good. (Friday, March 18, 8pm @ Continental Club)