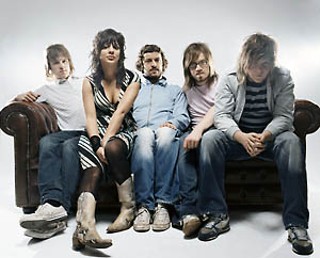 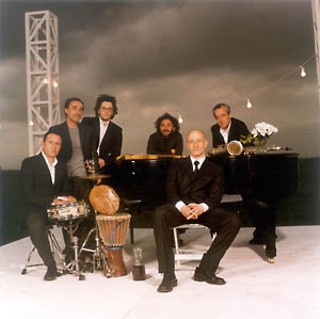 All showcase times subject to change

8pm, Elephant Room One of Austin's young jazz lions for going on a decade, Ephraim Owens has played with the city's best jazz and hip-hop acts and isn't afraid to bring his trumpet to rock shows and jump onstage. – Raoul Hernandez

8pm, Latitude 30 After forming in Denton in 2001, the Faceless Werewolves are making the move to Austin. The trio is rooted in the garage, but the Velvet Underground/Sonic Youth buzz that girds their interplay sets them apart. – Greg Beets

8pm, Club de Ville The otherworldy nuances of a thrash show invaded by Diamanda Galas and Karen O come across on these New Yorker's anxiety-inducing The First Trip Out (Ace Fu). – Darcie Stevens

8pm, Maggie Mae's This San Diego duo's debut, Born to Be a Motorcycle, is a punk rock version of The Rocky Horror Picture Show. Weird lyrics, saucy choruses, cheerleader chants, and Dadaist rants, all dolled up in a glittery ska/pop pantsuit and radiating sunshine. – Audra Schroeder

8pm, La Zona Rosa This 23-year-old Brit isn't the only one kicking out Pro Tools-enhanced electro-rock in his garage, yet few of his brethren have put out anything as ultra-stylish as "If You Want," which splits the difference between Soul Coughing and Franz Ferdinand. – Andy Langer

8pm, Lounge @ Crowne Plaza This local singer-songwriter has been slogging it forever, but that hasn't dimmed his spirit. The ebullient father of two turns in a collection of songs on his self-released fourth album, Long Way Home, that crackle with wit and hum with nostalgia. – Melanie Haupt

8pm, Blender Bar @ the Ritz Ten years of Timonium resulted in an all-time Low, Until He Finds Us (Pehr), echoed church music – as in recorded in a wooden hall filled with ghosts and confessions. A Cali trio better suited to the Velvet Underground than the great outdoors. – Raoul Hernandez

8:30pm, Emo's Main It took Montreal fivepiece Pony Up! one show and a few heckles to win over Ben Lee, with whom the all-girl group shared a split 7-inch last year. The girls put out a self-titled EP on Dim Mak in January. As their bio proclaims, "You don't need a penis to play rock & roll." – Darcie Stevens

9pm, Blender Balcony @ the Ritz The ages (19), style (suburban spazz), and locale (SoCal) lock up three cherry pies with some notable teen babes from Monsanto 20 years ago. Of course the Willowz had barely been born, which is why Sympathy for the Record Industry wastes no time in reissuing debut The Willowz Are Coming just prior to a proper label bow in May. – Raoul Hernandez

9pm, Jackalope Oakland's Harold Ray Live in Concert expands the land of 1,000 dances from Berkeley all the way down to Boca Raton. Their excellent 2003 self-titled debut on Alternative Tentacles brings to mind Tom Jones, Mitch Ryder, and a big bottle of bennies. – Greg Beets

MY WAY MY LOVE

9pm, Tambaleo Despite cultural reform and the emergence of pop bands amid sanctioned traditional music, tight regulations make rock shows in Iran a rarity. Tehran's 127 is the first Persian rock act to play out for international audiences. Don't you dare gaze down at your shoes. – Kate X Messer

10pm, Maggie Mae's Castanets are the brainchild of San Diego's Raymond Raposa, whom Asthmatic Kitty snapped in a move that made the wanderlusty young man's debut, Cathedral, widely available. While Raposa is the project's center, he's got players from fellow San Diegans Tristeza, Pinback, and Rocket From the Crypt. – Melanie Haupt

10pm, La Zona Rosa Are two sets of boy-girl siblings that look like a Norwegian version of ABBA a gimmick? Not with this UK quartet's organic Sixties vibe and familial harmonies. Sean, Romeo, Michele, and Angela: an erstwhile Summer of Love letter. – Raoul Hernandez

10pm, Cedar Street Courtyard A motley crew of Austin all-stars including Fastball's Miles Zuniga (as the oily Guy Fantasy) and utilityman Jeff Johnston, Small Stars could've easily stayed on the side-project/joke-band stage. It's still hard to tell if their hypercheesy take on lounge rock is serious or not. – Christopher Gray

10pm, Red Eyed Fly After doing time in respectable indie outfit the Long Winters, Sean Nelson has reassembled his crack squad of pop assassins to have another go at greatness. The Seattle-based outfit released EP Sometimes You Have to Work on Christmas (Sometimes) on Sonic Boom Records last year. – Melanie Haupt

10pm, Blender Balcony @ the Ritz Delta garage-bang trio the Bloody Hollies play with a fervor derived from jumping around during those long Buffalo winters. Signing with Sympathy for the Record Industry in 2003, the Hollies released the acclaimed Fire at Will, with If Footmen Tire You ... soon to follow. – Greg Beets

11pm, Exodus The noir-pop of L.A. trio Midnight Movies captures the zeitgeist of the city's hazy past. Dreamy pop mixed with singer/drummer Gena Olivier's Nico-in-Wonderland vocals and stark drumming makes for a dark yet groovy time, as heard on their eponymous debut. – Audra Schroeder

JIM AND JENNIE & THE PINETOPS

11pm, Red Eyed Fly The brainchild of Tulsa-based bedroom-pop king David Terry, Aqueduct followed a pair of smart introductory EPs with a similarly striking debut, I Sold Gold. It's cheeky in all the right places ("Growing Up With GNR"), melding perky pop with eccentric flourishes that hint at homeboys the Flaming Lips. – Andy Langer

11:15pm, Zero Degrees Don Scavone provides lyrical protection for hip-hop intent on misrepresenting itself. The gruff Brooklynite collects tribute and radio spins with his 2004 single "Revolution" mandating Scavone's paternalistic hands to be gripped tightly around every facet of his rough-and-tumble neighborhood. – Robert Gabriel

12mid, Flamingo Cantina Following the tradition of dub masters like King Tubby, Augustus Pablo, and Lee Scratch Perry, this NYC trio puts out a deep roots sound. Their recent Exploring the Dangers Of was a favorite of both reggae and down-tempo/chill-out fans alike. – Jay Trachtenberg

12mid, Maggie Mae's Morphing out of their 1977 UK Prefects garb, singer Robert Lloyd and bassist Eamonn Duffy gravitated toward a skinny tie sound until they split in the late-Eighties. Reunited, Lloyd and Duffy return as their era boomerangs back for the twentysomethings. – Raoul Hernandez

12mid, Blender Balcony @ the Ritz 2004 saw Austin's rock elite welcome the Good Looks, who earned their stripes with debut Let the Needle Drop, a louche, sexy trip back to the stacked heels and basement crash-pads of Iggy, Aerosmith, and the early-Seventies. – Christopher Gray

THESE ARMS ARE SNAKES Fugazi fans, take note of these Seattle art thrashers. The quartet's debut, Oxeneers or the Lion Sleeps When Its Antelope Go Home (Jade Tree), is a vicious attack of guitar hooks and squealing vox. Energetic and pounding, the full-length is the follow-up to last year's stunningly powerful EP, This Is Meant to Hurt You. 12mid, B.D. Riley's With the demise of Denton's Slobberbone fresh on the table, Brent Best still has a lot on his plate. His Southern-rock fueled melodies meet with whiskey dreams, broken hearts, and morning-after wisdom. New West reissued the band's juicy catalog, a reminder that Best has bitten off a lot by going solo. – Margaret Moser

12mid, Exodus Yes, they're definitely robbers; this NYC foursome has found the Magical Rolling Stones Songbook and lifted a few hot licks for their debut, Tree City. ROHS weave a few of their own sweet melodies into their songs, making Tree City a confrontation between piano ballads and rock swagger.

12mid, Buffalo Billiards Adam Richman hails from Allentown, Pa., but made the big move to the Big Apple to pursue the big leagues. The 22-year-old was snapped up by Or Music, which released The Patience EP in October. LP Patience and Science, chock-full of energetic indie rock, just dropped. – Melanie Haupt

12:10am, Redrum The Militia Group turns out crack, emo-kissed cadets with washboard rhythms, steely guitars, and Marine manners. Atlanta's Copeland are at the head of the class, last year's covers EP, Know Nothing Stays the Same, bested by new, lush In Motion. – Raoul Hernandez

1am, Elysium Inhabiting industrial spaces dark and gloomy, DÄlek's prog-rap echoes metal as 2004's Absence pushes hip-hop toward prior production extremities hidden within the works of Ministry and My Bloody Valentine. – Robert Gabriel

1am, Flamingo Cantina Driving convoys of bass through humid green pastures of rhythm, Denton's Sub Oslo navigates the inner sanctums of dub. The eightpiece fertilizes a potent crop with accents of clavinet, melodica, and Moog, invoking The Rites of Dub in 2003. – Robert Gabriel

1am, Mambo Kings Tripping Tropicana, the third release from Bogotá, Colombia's space-age disco sextet, spells it out from the title for those who don't speak Spanish, though it was cut in L.A. Groovy in any language. – Raoul Hernandez

1am, 18th Floor @ Crowne Plaza Jesse Harris wasn't on anyone's radar prior to his "Don't Know Why" skyrocketing his North Texas pal Norah Jones to multi-Grammy fame and fortune a few short years ago. The NYC-based singer-songwriter fronts his own band, the Ferdinandos, who appear on current album While the Music Lasts. – Jay Trachtenberg

1am, Mother Egan's Originally from Pleasanton, Texas, just south of San Antonio, Rodney Hayden has recently made the big move to Nashville. Solidly in the tradition of Merle Haggard and George Jones, the 25-year-old has released two albums of country music that feature his dusky voice. – Jim Caligiuri

KNIFE IN THE WATER

1am, Momos Not only is Canada churning out great pop and drone creations like Broken Social Scene, Stars, and Montag, they're bringing the rock as well. Winnipeg's Waking Eyes pays homage to the MC5 and the Who, though sophomore release Video Sound stands on its own two feet. – Darcie Stevens

1am, Co-op Bar Before McCarthys Kevin and Steve began fighting, they were Diamond Smugglers and Dung Beatles, reimagining Neil's and Paul's tunes with zeal. The power-pop originals on Ladies and Gentlemen … are classic with harmonies, power chords, and hook-laden lyrics. – Darcie Stevens

1am, Whisky Bar A blast from the local punk past, the Austin-based Terminal Mind is fronted by Steve Marsh, with Terri Lord from Sincola and Cindy Toth of the Reivers on bass and drums respectively. – Margaret Moser

1am, Habana Calle 6 Led by the twin guitar theatrics of Chris Burns and Andy Thomas, Austin rawkers Rockland Eagles treat the tiniest club like a stadium. In just such a fervor, Thomas recently broke several ribs back-flipping off the stage at Hole in the Wall. – Greg Beets

1:15am, Zero Degrees As protégés of producer Jay Dee, Frank N Dank's cameos on Dilla's Welcome to Detroit and Jaylib's Champion Sound fused verbiage to volatile yet sensuous instrumentals. Dilla's hairsplitting touch on FND's latest, Xtended Play, isn't as omnipresent as it was on 2003's 48 Hours, but the bawdy feel remains. – Robert Gabriel