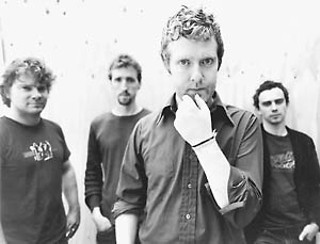 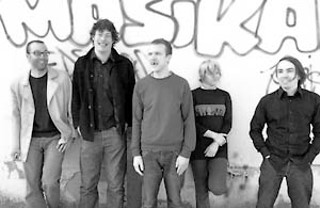 All showcase times subject to change

8pm, Hard Rock Cafe It's not every day one of the better folk-rock bands in town recasts itself as GN'R-loving badasses. Quatropaw abandoned their acoustic guitars for a volatile mixture of Sunset Strip sleaze; last year's eponymous debut has been making waves on regional radio. – Christopher Gray

8pm, Stubb's Already a UK hit, Aqualung, London's Matt Hale, now sets his sights on this side of the pond. Columbia's Strange and Beautiful capitalizes on American audiences' familiarity with Aqualung's odd rock through such hit TV programs as Nip/Tuck, Smallville, and The OC. – Jim Caligiuri

SPOTTISWOODE AND HIS ENEMIES

8pm, Habana Calle 6 Has Tom Petty gone cabaret? According to Englishman-cum-New Yorker Jonathan Spottiswoode and the rockin' soul of his heady debut, Building a Road, you can guess the answer. – Raoul Hernandez

8pm, Cedar Street Courtyard Like David Garza or Jon Brion, this Atlanta-raised singer-songwriter's strongest asset is his audience of peers. Although slicker than the groundbreaking Follow for Now might have indicated, last year's Soulstice was undeniably funky and eclectic. – Andy Langer

8pm, Drink Although it came out on Universal, this shaggy young singer-songwriter's marvelous debut, 2004's Poetry & Aeroplanes, wound up as obscure as the Faroe Islands, the tiny Danish-ruled kingdom he hails from. – Andy Langer

8pm, Emo's Main The Lashes are a sassy, image-conscious Seattle septet that gleefully plumbs the infinite goodness of raucous geek-pop in the vein of the Buzzcocks and Weezer. Their big-league jump to Columbia results in a debut LP this year. – Greg Beets

9pm, Whisky Bar Often mislabeled as simple punk rock, Ignorance Park shows are Stones-y grind one minute, sleek New Wave the next. A follow-up to the locals' 2000 keeper, Bad Luck … or the Plan?, is overdue, but frontman Johnny Walker lets it all hang out onstage anyway. – Christopher Gray

9pm, Room 710 Who's responsible for this low-end stoner rock nightmare? Why, the ex-wife of Melvins drummer Dale Crover! Her S.F. trio has churned out sludge since the dark ages of stoner rock, and upcoming III hits the mark like L7 shacking up with High on Fire. – Michael Chamy

9pm, 18th Floor @ Crowne Plaza SoCal certainly did us a favor by birthing Inara George. Her debut, All Rise (Everloving), is a free-flowing coastal breeze, melancholy as fog on a mountain highway. The singer broke out on her own after doing time in other SoCal bands and is now poised to give Norah Jones a run for her money. – Melanie Haupt

9pm, Friend's The sweet, moody sounds of Ida were made for falling in love. Their 1996 album, I Know About You, attests to that. They make the closest thing to lit rock – songs that build in narrative, climax, and resolve. The quartet's chamber pop can also be heard on their brand new album, Heart Like a River. – Audra Schroeder

9pm, Emo's Main The hauntingalt.country strains of Blanche provide a soundtrack for Detroit's urban ruins. Against a patina of steel guitar and banjo, husband-and-wife vocalists Dan and Tracee Miller plumb love and loss. Their 2004 debut, If We Can't Trust the Doctors ... (V2), is a warm statement of purpose. – Greg Beets

10pm, Buffalo Billiards Former UK Army Captain Blunt spent time in Kosovo and returned with a battleground troubador's hopeful heart and a clutch of songs as hauntingly lovely as rose garden despair. Atlantic debut Back to Bedlam is just out. – Marc Savlov 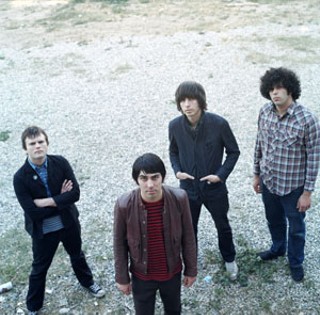 10pm, Pecan Street Ale House Before she married Murry Hammond of the Old 97's, Grey DeLisle found herself emotionally stranded in L.A. while her true love endured his exile in Nacogdoches, Texas. That sweet heartbreak was the inspiration for The Graceful Ghost (Sugar Hill). – Melanie Haupt

10pm, Continental Club This young trio from Columbus, Ohio, has following the loud and proud roots rock path trampled by the likes of Drive-by Truckers and Slobberbone. Their second blast of cowpunk, The Wall Against Our Back (Shelterhouse), was released in 2004. – Jim Caligiuri

10pm, Whisky Bar AF approaches music like a science project, something to be taken apart and put back together in all sorts of head-scratching ways. Eight or nine people onstage and any number of instruments, with the rhythmic drive of Broken Social Scene and genuine strangeness of local precursors Brown Whörnet. – Christopher Gray

10pm, Eternal Not only is it a great moniker, it's entirely apt; the fierce tangle of post-punk angst and classic rock churns ever out of this banging SoCal quartet. Last year's Black is Beautiful (Record Collection) caused song amnesia from one sneer to the next. – Raoul Hernandez

10:30pm, Fox & Hound A Houston rap pioneer whose first record as a member of Real Chill surfaced in 1986, K-Rino persists as a prominent figurehead within Southern rap, as evidenced by 2004's The Hit List. – Robert Gabriel

11pm, Chuggin' Monkey If the title of Full White Drag's latest EP holds true, Everything Will Fall on One Night. Pitting the Ontario quartet's weird time signatures and tempo changes against their obvious love of Nineties rock, their sophomore album, The Independence, hinted at Detroit's gritty rock history. – Audra Schroeder

11:20pm, Latitude 30 Ann Shenton, aka Large Number, incorporates a calliope, guitar loops, and all manner of cast-off sounds and audio anomalies into a cohesive whole. Call it experimental if you must, but new CD Spray on Sound is as organic as it is electronic, fusing theremin wails, harmonica sprays, and eerie vocals. – Marc Savlov

12mid, Vibe The Christian hammer of Seattle's Tooth & Nail Records is divine. Like the emo-lodic sweet tooth of Norfolk, Va.'s Mae, whose pop-rock flash can go from acoustic to electric rapture in the time it takes to cross yourself. – Raoul Hernandez

12mid, Copa Chicago's "feminine other" is like an edifying meditation session – all peace and quiet till the revelations hit the solar plexus. Driven by the yang of guitarist Joseph Costa and grounded in Lindsay Anderson's refreshingly earthy vocals, this duo began as a collective in the Windy City's emergent electronic scene. – Kate X Messer 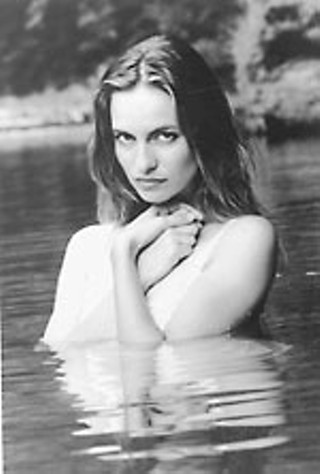 CHARANGA CAKEWALK12mid, Cedar Street Courtyard If this were SXSW 1975, Esquivel would be the special guest at this showcase. Austin's jack-of-all-instruments Michael Ramos whipped up an addictive cocktail of neon Latin lounge, titled it Loteria de la Cumbia Lounge (Triloka/Artemis), and went back on tour with Patty Griffin. – Raoul Hernandez

12mid, Exodus Proof enough that you can't judge a band by its covers, this East Preston, UK, quartet nicks a page from the Specials via anthemic pub-rock guitars and comes up smelling like Captain Sensible's New Roses. Possessed of a cheeky sense of humor (debut, We Am the Ordinary Boys), they're anything but ordinary. – Marc Savlov

12mid, Pecan Street Ale House Joshua Tree, known for its country rocker cremations, let slip this trio of compilers from the Royal Order of Rabbits. 2004's Music to Start a Cult To (Stinky) was a sly, brainwashing affair, beats and synths wrapped like barbwire around desert roots. Have some brown Kool-Aid and live to trip about it. – Raoul Hernandez

12:10am, Latitude 30 This Toronto synth-popper sings about food, drops a dancey beat behind it, and has created an infectious debut in Tales From the Pantry. Lucil is the alter ego of Krista Muir, who channels all her energy into the most absurd, Sprockets-fed kraut pop this side of Berlin. Think Peaches without the potty mouth. – Audra Schroeder

12:45am, Elephant Room NYC's Lascivious Biddies are back after a successful national debut at SXSW, following their self-released 2002 debut, Biddi-Luxe. The all-lady jazz, pop, and cabaret quartet just released Get Lucky, featuring a four-part harmony version of the Smith's "Ask." – David Lynch

1am, Copa The New Orleans duo of Joshua Eustis and Charles Cooper submerges fragments of the known within anomalous curiosity. Enlisting the Loyola University Chamber Orchestra on their sophomore album, Map of What Is Effortless, TTA casts itself as the shutterbug of your most peculiar dreams. – Robert Gabriel

1am, Habana Calle 6 Six-year-old Lawrence, Kan., indie rock enigma Ghosty is still scrapping away for its shot, despite a guest appearance on the Flaming Lips' Ego Tripping at the Gates of Hell EP in 2003. Let's hope their excellent, unreleased debut, Grow Up or Sleep In, gets picked up soon. – Melanie Haupt

1am, Buffalo Billiards Britpop darlings when they hit the scene in the late Clinton years, England's Embrace have since experienced peaks (an American deal) and valleys (three-year hiatus). The quintet is back in the limelight with last year's Out of Nothing (Independiente/Epic). – David Lynch

1am, Drink Like a Sonic Kink-fest in Who-ville, the Blue Van, from the small burg of Bronderslev, Denmark, lashes out with classic rock muscle. The four fine Danish dandies with rocker pageboy cuts, tight slacks, and ascots knotted rock on their new The Art of Rolling (TVT). – Kate X Messer

1am, 18th Floor @ Crowne Plaza A band since high school, L.A.'s the Like is a winsome femme trio that's already toured with Phantom Planet and Maroon 5. Darkly compelling pop-rock with shades of Sixpence None the Richer, third EP, Like It or Not, suggests June's Geffen debut will have a lot of kids liking the Like. – Christopher Gray

1am, Blender Bar @ the Ritz Tours with Bright Eyes, Rilo Kiley, and the Decemberists tell much of these Nebraska-to-Chicago transplants' story, but Hysterical Stars, due in May on spinART, is the real tale. Matt Focht's Big Country vocals are cut with a literary circus of song and sound, but it's "Song for Richard Manuel" confirming this might be the Band. – Raoul Hernandez

1am, Continental Club The Hacienda Brothers are Chris Gaffney and Dave Gonzalez exploring their shared love of classic country and soul. Dan Penn, who produced their just-released eponymous debut, has dubbed them Western soul. – Jim Caligiuri

1am, Eternal Tuscon's Mean Reds are fresh out of high school, were almost kicked off last year's Warped Tour, and wear very little on stage. "Cave Moms" off Some Kind of Adventure Through History, and "Get Yr Face out of My Grill" from 2003's Destination Imagination will make your parents angry. – Audra Schroeder

1am, Blender Balcony @ the Ritz Brooklyn trio Oxford Collapse throws its hat in the indie beat punk ring with debut Some Wilderness (Kanine). They're just now putting the finishing touches on their sophomore album, which draws from Mission of Burma, the dB's, and Sonic Youth. – David Lynch

1am, Jackalope Straight off the Sunset Strip, there are enough solid cock-rocking choruses on April's Band From World War Zero for these sleazy upstarts to have already made a fan of Sex Pistol turned deejay Steve Jones. Slots on last year's Reading and Leeds festivals have earned them next-big-thing status in the UK. – Andy Langer

1am, Velvet Spade Austin's Stepbrothers could be an episode of Little Steven's Underground Garage: choice nuggets of punk, rock, and soul, without commercials. Led by former Raunch Hand Mike Mariconda on lead guitar, last year they released Baby It's Over, an instant party-starter with the energy level of Robin Williams on crank. – Christopher Gray

1am, Lava Lounge Patio If Interpol and At the Drive-In had an illegitimate child raised by Fugazi, he would sound a lot like YourCodeNameIs:Milo. April's Ignoto should garner more post-hardcore accolades than 2004 shocker All Roads to Fault. – Darcie Stevens