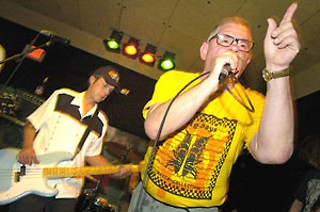 A most hale and heartfelt welcome to Austin, all you blue-state-voting, Prada-sporting, Sidekick-tapping, blow-sniffing, cameraphone-clicking, deal-making, bootlicking, cosmo-chugging, Prius-driving cocksuckers. Our recollections of the seven writhing days of utter lunacy portended by your early spring sojourn into fly-over country were only recently in mortal danger of dissipating like the ephemeral fumes of last night's Wild Turkey. Just lovely to see y'all again.

We're an amicable and accommodating sort down here, not at all the ill-informed caricature recently espoused by one of your favorite sons, Conor Oberst. This hardly strapping lad, who we're willing to double down has occasioned any number of you of either gender to attain orgasmic heights of musical and sexual ecstasy regardless, told a few hundred paying customers at Fort Worth's Ridglea Theater last month, "If you came to this show tonight, you're not a normal Texan. If you were a normal Texan, you'd probably be roping steers and raping Indians."

So yes, Conor, if you indeed happen to be among the scores of gifted troubadours availing themselves of Austin's bounty this week, be advised that repeating that sentiment in any number of local saloons will result in your sod-busting, square-headed, Cornhusker hindquarters being treated like a dirt-worshipping heathen. The rest of you, try not to be too distracted by the hoopleheads in the "Fuck y'all, I'm from Texas" attire. They don't bite, generally.

Corpse-feasting swine and antler-impaling conflict resolutions aside, the similarities between our beloved Eden on the Colorado and the profanely Shakespearean HBO series Deadwood are striking. Austin's relationship with Texas at-large loosely parallels Deadwood's with its surrounding territory, as both self-governing refuge for all manner of outcasts, misfits, and whores, and preferred location for prospectors to seek their fortunes, albeit with guitars and keyboards instead of pans and pickaxes. As the only city in the Lone Star State where hospitality and entertainment are vocational pursuits as necessary, worthwhile, and occasionally even lucrative as the medical, judicial, or mercantile arts, Austin basks in a vigorous creative spirit fueled by its equally vigorous taste for spirits of other sorts. We cherish our numerous and assorted vices as highly as any limber-dicked cocksucker in the Gem Saloon.

Owing to this, Austin is often included in the two dozen or so sybaritic American locales referred to by some as "people's republics" – Seattle, Berkeley, Madison, Williamsburg, etc. – where diversity and tolerance are supposedly as welcomed and applauded as they are shunned and scoffed at everywhere else. While our hybrid SUVs may be adorned with more anti-administration slogans than Houston or Dallas, and certainly Waco or Wichita Falls, we've got an ample amount of beat-up pickups sporting gun racks and "support our troops" magnets; the periodic gun shows held at the Crockett Center outdraw opera and ballet every time. Yee fucking haw.

Blue Austin may embrace Whole Foods, Threadgill's, and BookPeople wholeheartedly, but the Broken Spoke, Whataburger, and Adult Video MegapleXXX are far from foundering at the cash register. Country, not indie rock or hip-hop or classical, is the most popular genre in town by a damn sight; twin Clear Channel twangers KASE and KVET routinely dwarf their competition in the ratings. In our more reflective moments, a fair number of us have even been known to pray, and for entirely different reasons, "God help us all" is an increasingly popular sentiment in certain quarters.

Considering that this once-common habit is now almost exclusively the indulgence of those in the service and entertainment industries as it is, and that twice as many local bars already forbid indoor smoking as sanction it, the ban's proponents' eagerness to press the issue smacks less of genuine concern for public health than it does of an old-fashioned moralistic crusade. City Council may well reconsider once the revenue stream inevitably begins to dry up, but by then it will almost certainly be too late.

Since our smoking issue won't be decided until well after you're back sipping lattes at your corner Starbucks, much more germane to your SXSW experience will likely be the often hoopleheaded activities of local law enforcement. In fact, Austin's most recent brush with the national spotlight came last month, when popular African-American nightclub Midtown Live went up in flames, and soon enough Austin Police Department spokespeople were on Good Morning America frantically trying to save face after an officer at the scene sent the onscreen message "burn baby, burn" to his buddies.

This is but the latest in a shamefully long line of police-minority altercations, but even if you somehow missed it, there's no way you could have missed the fracas that erupted when Ozomatli decided to take their conga line out onto Sixth Street last SXSW and wound up with two members and their manager checking into the gray-bar hotel. Frontier justice is alive and kicking, so bear in mind your surroundings, and basically just watch your ass.

Otherwise, Austin is like most other places in that trouble is relatively easy to avoid unless specifically sought out, and especially during SXSW, there's an infinite number of better ways to spend your time anyway. With each succeeding year, the number of music-related activities both day and night grows faster than prospectors heading for Sioux country after word of a gold strike. SXSW so dominates Austin's psyche during March that a lot of people don't even know the city is also hosting an NCAA tournament regional next weekend, for the simple reason that right now next weekend seems as far away as next year. The ceaseless torrent of bands and parties and, lest we forget, complimentary libations tends to provoke opposing reactions among natives: Many turn tail and run to the hills, but many more lick their chops, brandish their hangover remedies, and dive in with both feet.

Like Swearengen fattening his coffers by maintaining interests in multiple illicit activities at once, SXSW prospers more every year because it really can be anything to anyone, and everything to everyone. There's room for the big labels to manufacture the type of buzz they hope will take an act already safely under their wing to gold or platinum levels of success, and for a band unknown to anyone outside Travis County to play for a virtually empty room at their first day party Wednesday and a full house at their official showcase a few short days later. Some band might suffer the indignity of a poorly attended, problem-plagued showcase only to emerge that much more motivated to stick with it, while another composed of members long since comfortable in other careers will break out the instruments just because friends they haven't seen in months or even years are in town.

There may be a lot less mud and about the same amount of whiskey, but SXSW and Austin both mirror Deadwood most in that that big strike could never happen at all, or it could be right around the corner, but whatever good or ill fortune the future betides, you'll never know unless you've got a stake in the game.

The tables are now open, cocksuckers. First round's on the house.