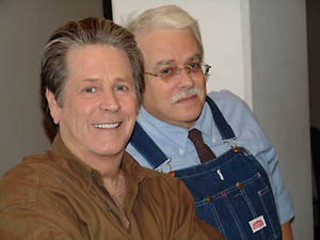 Imagine being an artist and living with the knowledge that your best-known work might never see the light of day. Prior to the 2004 premiere of Brian Wilson's Smile at London's Royal Festival Hall, that knowledge was Van Dyke Parks' reality for 37 years.

Begun in 1966, in the wake of the Beach Boys' revolutionary "Good Vibrations," Smile was going to redefine what a pop album could be. Wilson and lyricist collaborator Parks envisioned a modular marriage of pop, folk, and classical elements set against the backdrop of an elliptical trip across Americana. Former Beatles publicist Derek Taylor spread the word about what was afoot, and Leonard Bernstein further validated the proceedings on his CBS News special Inside Pop: The Rock Revolution. Then it all fell apart.

The other Beach Boys returned from tour in spring 1967 and failed to embrace Wilson and Parks' vision for Smile. The Beatles released "Strawberry Fields Forever," and Wilson felt he'd lost the so-called "production race." Capitol Records grew increasingly wary of delays in the album's completion. All this opposition sent Wilson toward a mental breakdown, and Smile was scrapped later that year, becoming the legendary "lost" album in pop music history.

"I grew accustomed to the resignation that it was a thing of the past," says Parks today from his home in Los Angeles. "I developed a strong desire for it never to be brought up in mixed company again. I was definitely apprehensive when I heard he was working on it again. That frightened me because the whole thing was such a sad chapter in his life and mine as well."

Reducing Parks' prolific career in music to his work on Smile doesn't begin to do him justice. Parks is a gifted composer, arranger, and idea man in his own right. In addition to his celebrated collaboration with Wilson, other highlights of Parks' extensive and varied résumé include:

1968's divisively ambitious Song Cycle, which artfully combined snippets of baroque, Tin Pan Alley, and psychedelia in a fascinating, brazenly uncommercial manner; co-producing the major label debuts of Randy Newman and Ry Cooder with Lenny Waronker; 1984's Jump!, a concept album exploring the lost art of minstrelsy through the Uncle Remus stories collected by Joel Chandler Harris; string arrangements for the brilliant coda of U2's "All I Want Is You," and co-writing "The Take-It-Easy Trailer Park" with Kinky Friedman.

In fact, it just so happens Friedman is visiting Parks the evening of our interview. "We're having ribs," confirms Parks. Naturally, one is forced to digress and ask what Parks thinks of Friedman's gubernatorial candidacy in Texas.

"I like the new motto," chuckles Parks. "The first one was, 'How hard can it be?' The next motto was, 'Leave no lesbians behind,' and one of his advisers said, 'Kinky, that won't work.' The new one is, 'A fool and his money will soon be elected.' He's a funny guy. Very substantial."

"We may have met at a coffeehouse called the Troubadour where I engaged, as people did in those days, in a lot of quite flexible musical alliances," says Parks. "They would last from an evening to months, and I met many people there. That was where folk music was going electric, so you got a little bit of all kinds of crowds. It was folk goes rock – that's what the Troubadour represented. They had a bar with a piano, and I played there often.

"In 1963, Bob Dylan came along with his record and a lot of people started playing guitar. At that point, I figured I'd better just go ahead and start playing the piano. You could play a lot of music on a piano, and I did. I must've met Brian there through various convergences. Danny Hutton [Three Dog Night] was another friend of mine in the music business, and he may have introduced me to Brian. But so be it. I knew a lot of people that knew Brian Wilson.

"The first piece that I got to hear from Brian was when I went up to his house, with David Crosby, who's also said he introduced me to Brian. We were at the Troubadour doing folk music and stuff. David Crosby had asked me to be in the Byrds. I couldn't think of that. I just wouldn't do that. I didn't want to be a Byrd.

"We went up to Brian's house, and the first thing he played us on a four-track was the basic track to 'Sloop John B.' 'Sloop John B' of course was a folk song, so it turned out that Brian had been somewhat influenced by the same things I was influenced by – folk music and singing and so forth. All of that appealed to me and spoke very highly of him, as well as his nod to folk music at that moment.

"There were a lot of things about Brian that came out of his great curiosity, showed he was a man of inquiry and had a discerning mind and a good heart. Even at the age of 22, when I was somewhat oblivious, I saw he was a person of great consequence."

With the Beach Boys out on tour, Parks and Wilson pursued their vision for Smile wherever it took them. Parks calls the first eight months of their collaboration "monastic" in nature. As far as Parks was concerned, he was working for Brian Wilson, not the Beach Boys. He found out it wasn't that simple when the band returned home.

"I met the other guys and ultimately came to collision with one of them," Parks recalls. "That was Mike Love. His antagonism made it impossible. You have to remember these people all had their relationships pre-established. I hadn't figured on working for a committee. Condoleezza Rice once said, 'I don't do committees.' That's the one thing I like about her."

Although Parks was briefly summoned to the studio to explain lyrics like "Over and over, the crow cries uncover the cornfield" to a skeptical Love, the battle over Smile's artistic and commercial merits was largely left to Wilson.

"Even though he made his best effort to try and get the group to sing this music, he ran into their sheer inability to do it," reveals Parks. "Perhaps that wasn't so much malice as just musical ability, but I wouldn't have thought any of that at the time. I was simply focused on working on some words.

"To tell you the truth, I was oblivious to all those considerations. A record should sell? That was beyond my understanding. That's not why we were in show business. We weren't in show business as far as I was concerned."

Faced with this impasse and not wanting to come between Wilson and the rest of the band, Parks walked away from Smile until 2003, when Wilson called to ask for help with incomplete lyrics. Finally surrounded by a supportive band led by "musical secretary" Darian Sahanaja of the Wondermints, Wilson finally completed Smile. Parks couldn't be happier with the result.

"I'm delighted it matters as much to him, and he admits this, as it could possibly mean to me," says Parks. "I always imagined that, but to see it happen and to have it be part of his re-emergence into the social world makes it a wonderful story.

"The discipline in the performance is so high. They've crossed their t's and dotted their i's here. The music is yeoman's stuff. It takes a great musician to plow through these areas, and it's just amazing what they come up with."

In the documentary Beautiful Dreamer, Parks comes to tears at the conclusion of Smile's debut performance. Must have been a lot of weight taken from his shoulders.

"Yes, but it's a weight I didn't know I had," Parks responds. "I didn't realize it weighed so heavily on me until the weight was lifted. It spoke to something I always thought addressed the character of a man, and that is never to start something you can't complete."

More on 'Smile' and Brian Wilson: