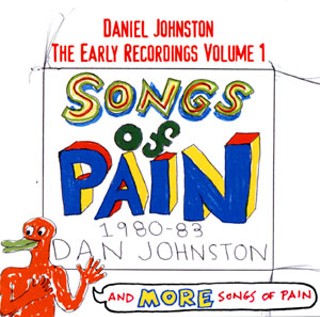 If I had my own way

You'd be with me here today

But I rarely have my own way

I guess that's why you're not

here with me today

1985: Deep into writing one Saturday afternoon at the offices of The Austin Chronicle, I heard a strange sound near the front door. I ignored it and kept writing. It continued. Finally, I went over. Opening the door, I found a skinny kid shuffling, not knocking, but rubbing his feet on the mat. He handed me a tape.

"I'm Daniel Johnston," he said, "Here's a tape of mine for you to listen to."

"Thanks," I said, "I'll pass it on to a reviewer. If they like it, they may review it for the paper."

Nodding, almost mumbling, he stood there. I closed the door and headed back across the room. The shuffling sound continued. Again, I opened the door.

"Uhh I gave you that for you to listen to," He said, "Not to be reviewed."

Oct. 4, 1985, Austin Chronicle: "Without fanfare or introduction, a slight, obviously nervous singer holding an acoustic guitar steps up to the mike and starts playing and singing. His playing is awkward, his singing shaky. The musicians and writers who fill the room leaned forward. This is who they've been waiting for. At first the talk seems to continue unabated, this singer swimming against a hard up-stream current, a voice packed with passions and innocence near quavering.... The guitar playing inexperienced but deliberate, the guitar used for emphasis, a chord struck, a pause, another chord. The talk starts fading, dies down to just the all-the-time scene makers who would talk through a Bob Dylan/Elvis Costello duet. Most of the club is poised, watching, captivated; someone asks, "Who is this?" They're shushed. Some aren't sure if this is a joke or not.

And no one knows who they are

They come from afar

They do what they have to do

And Turn into big stars

And no one can stop them

2003: These notes accompany a reissue of Songs of Pain and More Songs of Pain, two of Daniel Johnston's first recordings. Daniel made them in the cellar while living at home with his parents in West Virginia. Born in Sacramento in 1961, he was the youngest of five children in a fundamentalist Christian family that soon moved to New Cumberland, W.Va. His father, an engineer, a member of the famed Flying Eagles during World War II, who had worked on Minuteman Missiles, landed a job with Quaker State. Daniel didn't fit in, except in the cellar.

The two albums/tapes/diaries/epics are about his unrequited love for a woman. By the time I met him, this story was years old. The truth is that by the time I listened to these two tapes, I barely paid attention. I was soaking in the bath of Yip/Jump Music, Hi, How Are You, and Retired Boxer, listening to them day after day. I didn't realize there was a body of work before. Listening to them, I was struck at how in so many ways the songs sounded so much more carefully crafted and traditionally constructed than the ones that would come soon after. I heard the mainstream music that influenced him in song after song of the over 35 songs on these two releases. On the later works, I just heard Daniel.

1979-84: In the cellar of his home in West Virginia, Daniel and his friends hung out making music and listening to records – Bob Dylan, Neil Young, David Bromberg, Sex Pistols, and especially the Beatles. Loving art, comic books, and music, Daniel wanted to be Joe Simon and Jack Kirby as well as John Lennon and Paul McCartney.

"It was really wild in West Virginia because all we had was records," he'd said. "When I was 19, I wanted to be the Beatles. I was disappointed when I found out I couldn't sing."

They began recording tapes that they traded among themselves. After high school, he went to a branch of Kent State where he majored in art. There he fell in love with Laurie and pursued her unsuccessfully. She married an undertaker. Unrequited, his love grew, almost independent of her. His romance and passion flowed into dozens of songs over the years. The first most intense flowerings were Songs of Pain followed by More Songs of Pain.

Two and a half years into the art program he left school and his parents' home, moving to Texas. He once told me that this was on the advice of someone at Marvel Comics. He first landed in Houston where he stayed with his brother while working at AstroWorld on the River of No Return ride. There, in less than a year, he recorded both Yip/Jump Music and Hi, How Are You. Next was San Marcos, where he joined a traveling carnival.

"It was like a movie all the time. Everybody around me was a great story that never stopped, and for the first time, I realized how much freedom you have to do what you want, how you could live going place to place."

After five months, he moved to Austin, where he began handing out tapes to anyone he met.

1985/86: Daniel and his work became better known. Austin bands covered his songs: Glass Eye, Butthole Surfers, Wild Seeds, Reivers, the Texas Instruments. His occasional live performances, though inconsistent, were well attended. Daniel got a job at McDonald's. His national reputation slowly began to grow. The Dead Milkmen recorded "Rocket Ship," David Byrne and Sonic Youth were interested. It was fun to really know an artist. Had you asked me before, I would have said, "If I could have known Van Gogh, his madness would never have bothered me." No matter how difficult Brian Wilson could be, I knew I would have understood. Genius is so splendid to be around that its light will heal any irritation. Forget that, genius up close isn't always pretty.

Quite often, Daniel was a pain in the ass. Daniel's focus was Daniel and Daniel only. Manipulative and innocence, Dr. Jekyll & Casper the Friendly Ghost, he looked like a near-child, sounded like an innocent, seemed a little slow, but a part of him always judged the odds around him better than any Vegas veteran. He was truly overwhelmed by the attention; he expected nothing less and would compare himself to the Beatles. Both halves of the Solomon baby – the child of Marx and Coca-Cola, as well as of William Blake and H. Bosch – he wasn't simply defined by oppositions but was a card deck of personalities fanned in a circle, always moving, fading in and out of each other.

As he talked of his genius and our obligation to it, I would grow red and nuts. How could one so innocent cause such emotional chaos? I don't remember the details. I remember yelling at him in the office, as he pushed buttons I didn't know I had. Slamming my fist on the desk and screaming, I wondered why I didn't just hang up the phone.

1985/86: My roller coaster relationship with Daniel accelerated. In July 1985, MTV's Cutting Edge came to town. Many folks told them they had to include Daniel. They did. When it was shown Aug. 25, Daniel was the unexpected star and his national reputation spread. McDonald's, which had cut back his hours because he wasn't good at much, increased them dramatically. He would be called from mopping the floor to the phone for MTV, Rolling Stone, A&R executives, journalists, well-known musicians. McDonald's phone was the only way to reach him. He was riding high and becoming famous, just like he'd always dreamed. In March 1986, he won the songwriter category in The Austin Chronicle Music Poll. It turned out that whenever he got too close to the sun, it turned dangerous for Daniel.

November 1986: Daniel was into the "happy smokes" again (his name for pot). Girls liked him, which both excited and bothered him. His weird grip on the day to day was starting to slip. At a Butthole Surfers' show he was given acid. A couple of weeks later, he took a bus to visit a sibling and nieces and nephews. Sooner then expected he returned. His family sent him home early because he was scaring the children. He told about looking out the bus window, seeing cow skulls everywhere. He told me that he realized that they were the mark of the devil and Texas was the devil's state.

A few days before Christmas, lying in bed with a temperature of 103, the phone rang. Someone asked if I knew Daniel. They said I'd better come to the UT campus. There Daniel was standing in the middle of a creek. I remember a light drizzle. His eyes had gone mad white. He was singing, he was testifying, he was demanding our baptism. He sang "Running Water." He sang a hymn. I tried to talk him into coming in out of the creek. You can't reason with a crazy person. He talked of God and the devil. Of being lost and being saved. I have no idea how long we were there. Finally the UT cops showed up. They said we had two choices. We could go in and drag him out. Or they would go in. But if they went in, they weren't going to be very happy about it. Another guy and I went in, we dragged Daniel to shore. As soon as we got close, the cops grabbed him and took him off. I went home to bed.

Two weeks later, a friend had just finished visiting Daniel at the Austin State Hospital. When he got there, Daniel's social worker said Daniel was suffering from two serious delusions. The first was that the military was going to take over the country. The second was that he was going to be on MTV the next week.

2003: Okay, so erase every word above. I want you to think about this: It's a Saturday afternoon in 1985 or whenever. You're broke, not in love, and unhappy. You're writing in an empty office. This kid gives you a tape. You put it on. You know nothing about him or his music. Imagine what it was like, what it was fucking like. Hearing Daniel for the first time. Everything you know is wrong. Music reinvents itself in the middle of your ears. You sit there, not stunned but not normal. You play the tape again.

So, I don't know where or when you first heard Daniel. Maybe this is the first time. These songs are amazing. Sophisticated and naive, they ache of sorrow and sincerity, yet they mock their author, sometimes lovingly and sometimes dripping with contempt. Listening, you figure he is real because he is real, but that doesn't make him simple. Doesn't make him easy. Don't be fooled. Fall in love, open your heart, feel un-alone, but don't be fooled.

The days go so slow

I don't have no friends

Except all these people

Who want me to do tricks

For God and Country
Daniel Johnston Revisted/Known by Kathy McCarty