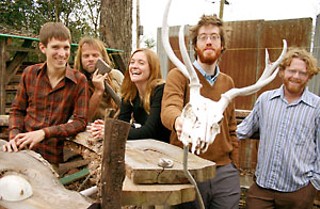 He didn't plan it this way. It just sort of happened. Despite the fact Jonathan Meiburg began his post-collegiate career as an English major, he's become the world's leading authority on the South American Striated Caracara, a falconlike endangered species native to the Falkland Islands.

Turns out a fellowship "to study community life at the ends of the earth" brought him to Terra del Fuego and the Falklands after college. While there, Meiburg worked as an assistant on a bird survey. The job changed his life.

"I saw these things and said, 'I never thought the world could be like this,'" he says.

Now Meiburg is writing his master's thesis on the South American Striated Caracara. Meiburg is also the driving force behind Shearwater, one of the most interesting bands to come out of Austin in a long time. You'll find bird art on the band's last two discs, 2004's Winged Life, which features the ocean bird the band takes its name from on the cover, and their recent EP, Thieves.

"We arrived at our sound by trial and error," Meiburg states. "It's partly because Thor [Harris] is such an interesting musician. He's been playing drums and vibraphone at the same time. He plays melodica, too. He brings an interesting palette to what we do."

Meiburg and co-conspirator Will Sheff are also in another Austin band, Okkervil River, which is more Sheff's vision. Meiburg acknowledges his songs are a lot less straightforward than Sheff's.

"We try to make an egoless kind of music," he explains. "There's a narrator, but you have no idea who it is or what the aim of that person is. Will's songs have more of a narrative to them. "Honestly, I'm amazed I get to work with such talented people. There have been times when I've looked around the room, wondered why they're still there, and realized they liked playing my music."

As for the future, it holds lots of touring; Okkervil will soon head back out on the road with the Decemberists, and when that's done, Shearwater heads out. Meiburg would then like to start work on a new album.

"I'm thinking of declaring war on guitar on the next record by trying to not use it as much as possible," he asserts. "A banjo can do a lot of things that a guitar can do."

Meiburg says he's off to work on his thesis. Is he more a musician or a biologist these days?

"I'm more of a musician," he asserts without hesitation. "The science can wait just a little bit longer. I figure those birds waited 70,000 years in the Falklands for me to show up, so they can wait a few years more."