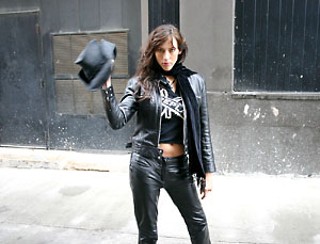 She plays castanets, she works without a net, and the audience likes it better when she walks onstage. With the release of Guitars & Castanets, Patricia Vonne's second album stakes her claim on Texas border rock and mines a rich vein of golden Mexican rhythms.

"Being one of 10 children in San Antonio, there was always music in the house," says Vonne. "My mom would sing to us in Spanish and have us harmonize. My dad was a drummer in college, so he always had a kit in the house. They loved having mariachis come to our house. I also grew up listening to my brother's record collection of Cruzados, Lone Justice, and Johnny Reno. I always loved Southern rock and the diverse mix in the music I was hearing."

"My brother" is her elder sibling, director Robert Rodriguez, with whom she shares a close bond. The two work together as time and projects permit. Vonne's "Traeme Paz," a bonus track on her new album, was also featured on the soundtrack of Rodriguez's Once Upon a Time in Mexico.

"I'm really proud of this song in particular," Vonne emphasizes, "because I co-wrote it with Robert, whom I enjoy writing with so much, and we wrote it for Alejandro Escovedo, who inspired it. Remember the song 'Castanets' that Al wrote? He'd let me join him onstage with my castanets, so this is my way of thanking him."

The castanets set Vonne apart. They're her instrument of choice, and their distinctive tone is a hallmark of her music. Novices to her shows may be surprised to see her sinewy swaying onstage as husband Robert LaRoche accompanies her on Spanish guitar. Her lanky, strikingly beautiful appearance suggests a haute couture model, and indeed a stint modeling inspired her to start her own band.

Guitars & Castanets will add many dates to Vonne's already burgeoning calendar. Her music takes her all over, an experience she treasures. "I traveled to Europe for the third time this past year," she notes. "I visited Norway, the Netherlands, and Germany. The audiences there are so wonderful and generous."

Yet there's no place like home for Vonne, who, like her brother, lives in Austin. The town's constant creative flow puts her on record in the fine company of Charlie Sexton and Jon Dee Graham as well as popular producer Carl Thiel. Songs like "Rebel Bride" transcend the singer-songwriter genre with a twist.

"The rhythm of the song was surf-inspired. I just love that drumbeat, and I envisioned a rebel bride! I'd always wanted to write a sexy, rockin' wedding song. A woman who knows what she wants. She lassos her man and they elope!"

The image is so theatrical as to suggest a broader scope for her songs. Patricia Vonne keeps one eye on her options.

"I'm always putting out feelers to film and TV for my songs, so we'll see."