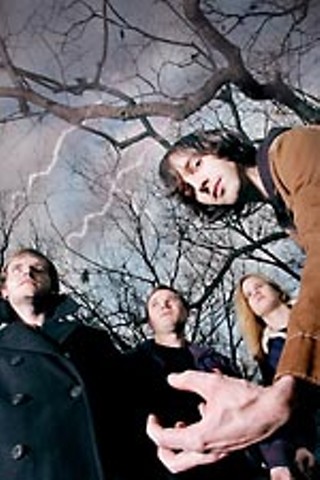 To watch the Sword play live is to witness some sort of ritual. The local quartet's songs start off slow and precise before turning into a completely different animal, rising up in a puff of smoke like some half-dragon/half-whale, which then pulls you into a fiery abyss where warriors with Nordic names battle black-cloaked banshees. In other words, their music is heavy.

The current lineup has been playing shows for almost a year, and guitarist/singer J.D. Cronise, guitarist Kyle Shutt, bassist Bryan Richie, and drummer Trivett Wingo have taken Austin by surprise with their bottom-feeding metal. Onstage, Cronise and Shutt deliver brain-melting guitar licks while Richie and Wingo crash into their respective bass and drums like meteors.

Inspired by Sleep, Slayer, and the Melvins, the four Swordsmen are stealth assailants, mutating from sludgy to melodic so discreetly it leaves a bruise. They make a conscious effort to slowly immobilize rather than whiplash.

"Our influences are numerous, and most of them are probably fairly obvious," Cronise says. "As far as my musical background, I'll just say that I always knew I'd have a band like this sooner or later."

Stylistically, there's a lot going on here. They've borrowed heavily from the sludge rock pantheon of sputtering riffs, howling vocals, extended buzz-saw jams, and booming drums, but also incorporate a fantastical storyline into their songwriting, as heard on songs such as "Barael's Blade" and "Ebethron." It's something those metal bands over in Sweden and Norway do so well, and something that also tends to slap bands as heavy as the Sword with certain labels.

"I think terms like [stoner rock] are basically musical stereotypes and therefore inherently negative," Cronise says. "The metal genre in particular seems obsessed with overcategorization. There are much more inaccurate terms to describe us than 'stoner rock,' but I prefer to call it just heavy metal."

Fair enough. In their short time together, the Sword have already played with noise heroes like Jucifer, Don Caballero, Mastodon, and locals Tia Carrera and Gorch Fock, and they plan on touring with ...Trail of Dead throughout April. In the meantime, their three SXSW shows should provide ample fodder for label grazers.

"Being from Austin we think SXSW is great," Cronise replies. "We can go see a bunch of bands for free, play music, have a good time, and then go home and sleep in our own beds. We are very grateful that we were invited to participate."

That metalheads throughout the domestic tour circuit are bound to respond to the Sword seems a given. It's practically prophesized in the band's mission statement: "Its edge is made of metal so hard that it holds a razor sharpness even after repeated use in battle."