Love in the Time of War

Nanci Griffith returns with our 'Hearts in Mind' 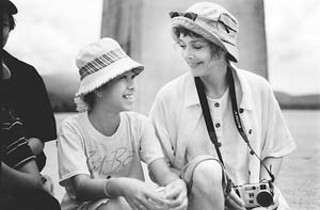 How many musicians can say they played the Hole in the Wall and headlined Carnegie Hall? Nanci Griffith can. In the Seventies, the sweet-voiced singer, now a longtime Nashville resident, had a standing gig every Sunday night during the Drag-bound bar's first half-decade. Since that time, she's appeared at the iconic New York City concert hall four times, selling it out more than once. In between shows at both venues, Griffith's won Grammys, had international No. 1 hits, and seen her songs covered by a wide range of artists while earning recognition worldwide.

Griffith was born in Seguin in 1953 and raised in Austin. She attended the University of Texas getting a degree in education. She taught kindergarten and first grade while first trying out her songs at places like the Hole in the Wall and Kerrville Folk Festival. She even appeared as an opening act at the Armadillo a couple of times before the now legendary venue was torn down.

Since 1978, Griffith has released 15 LPs, from her independently released debut, There's a Light Beyond These Woods, to her brand new disc, Hearts in Mind. Over the course of 30 years, one thing has remained constant in her career. Her songs have maintained their literacy while never waning in Griffith's fondness for romance.

There's a difference with Hearts in Mind though. In these vexing times, Griffith steps up with her share of political statements. She is a self-proclaimed pacifist, after all. In fact, the album's major themes are love and war, two ideas inextricably linked throughout the centuries. In Griffith, they coexist superbly. She also takes chances and has fun in the process. The biggest chance was making an album without label backing.

"This is the first time I set out on my own," confirms Griffith, on the phone from California where she has a rare Sunday off while on tour. "I worked with my drummer Pat McInerney. It'd been four years since I'd made a studio record, and I was writing a lot. I didn't want the pressure of doing it with a label or bringing in an outside producer. So we decided we'd try and do it on our own, taking our time, and if we got lost, we had [producer] Peter Collins on hold to come in and bail us out."

"We never had to make that phone call."

The disc was picked up by a relatively new imprint, New Door, which is part of the Universal conglomerate, thus returning Griffith to the site of her greatest success. In the late Eighties, MCA, a major part of Universal Music Group, was instrumental in furthering her career by releasing albums like Lone Star State of Mind, Little Love Affairs, and the live One Fair Summer Evening.

"New Door was the first to respond," relays Griffith. "They called my manager and said, 'We really want her back at Universal.' But really the record was complete down to the artwork before we even let anyone know we were making a record. We would have sold it out of the back of a station wagon if that's what it would have taken."

The reason for the four-year delay between albums can be attributed to September 11, 2001. Unlike many artists who expressed their grief in public after that tragic day, Griffith was unable to write for a couple of years.

"I just didn't know how to express my own feelings," she recalls. "I didn't know how to process my personal life into writing. I took time to see the changes in everybody's life after this tragedy – process that our lives had changed and they'll never be the way they were."

The song that broke her artistic silence was the anti-war hymn "Big Blue Ball of War." "It's about love in a time of war, and it's about peace and reconciliation," explains its author. "It's what the whole record is about."

In the liner notes, Griffith goes a little deeper. "Okay boys," she writes, "it's been all about you, your wars, your power and your feuds since Abraham. It's time to step aside and let the ladies clean this house and you take your garbage out and leave it on the curb." Perhaps a radical idea, but not surprising from a woman of such strength and fortitude.

There are a number of standout tracks on Hearts in Mind, though one's first impresses are bound to deal with the range of musical styles Griffith takes on. It's mostly folk-based, no doubt, but there are snatches of country and bright-eyed pop. There are also some surprising special guests. Jimmy Buffett adds vocals to the playful "I Love This Town," while closer "Our Very Own" features Keith Carradine. It's a delicate duet they wrote together for a forthcoming film that will feature the actor.

Again, though, it's the disc's weighty themes that impress, beginning with opener "A Simple Life," a plea for the life we expected in the 21st century instead of the hand we've been dealt. Its chorus sets the tone for the album: "I want a simple life, like my mother. One true love for my older years. I don't want your wars to take my children. I want a simple life while I'm here."

"There's a cloud on all of us that's taking the simplicity in life away from us," extrapolates Griffith. "We have no control anymore. We have no control over our lives, over the fate of our children – whether or not they're going to end up in conflict. Let me have choices in my life the way my mother did.

"It's also calling us back to where our parents and grandparents were, paying attention to what we have around us. That's something that we need. The earth can provide everything that we need. All we have to do is reach out and grab it. But if we're not in power, we can't."

One way Griffith is addressing this is with her involvement in organizations like the Vietnam Veterans of America Foundation, the UK-based Mines Advisory Group, and the Campaign for a Landmine Free World. She's traveled to Vietnam, Cambodia, Kosovo, Angola, and Bosnia in support of the effort to locate and remove existing land mines and to assist in the rehabilitation of the victims of land mines.

"I travel around to the clinics the VVAF has set up to visit with patients," she explains. "I do everything from visiting with land mine victims to performing. I've done three concerts in Hanoi and two in Phnom Penh. Audiences are a combination of Americans working there and local people, and the reaction is wonderful. Nobody puts Hanoi or Phnom Penh on touring schedules. It's terrific.

"I also did a show in Kosovo for troops there. Being involved with the Campaign for a Landmine Free World has been my way of giving back."

Griffith's travels have obviously affected her, as evidenced by the inclusion of songs "Heart of Indochine" and "Old Hanoi" on Hearts in Mind.

Those following the singer's career closely will recall that Griffith took time off from music in the Nineties. First, she was diagnosed with breast cancer, then a couple of years later, faced with nonrelated thyroid cancer.

"I'm cancer-free," she reports today. "It's been 12 years since I was diagnosed with breast cancer. I pretty much worked my way through that with music, but the thyroid was more difficult to overcome. I really had to adjust myself."

The queen of "folkabilly" will be returning to Austin to headline the Austin Music Awards March 16. She'll be appearing with the Crickets, and while it may sound like an odd pairing, she and Buddy Holly's band are family, performing together ever since Griffith's appearance on the 1996 Holly tribute, Not Fade Away (Remembering Buddy Holly). Since that time, the Crickets have backed her regularly throughout Europe, and local folks might remember a taping of Austin City Limits they did together in 1998.

"They're my lifelong heroes," Griffith enthuses. "Anytime I get to play with the Crickets I feel totally blessed."

J.I. Allison, the Crickets' drummer from day one, laughs, "She says she grew up always wanting to be a Cricket, and now she is one – any time she wants to be."