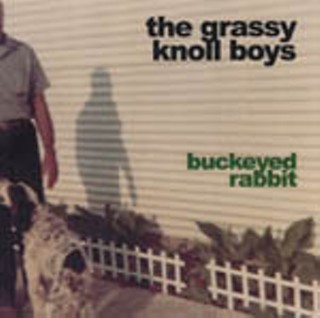 Of the new bands in the burgeoning Central Texas bluegrass scene the Grassy Knoll Boys appear to be the most musically accomplished. Leading the way on Buckeyed Rabbit, their self-released debut, is Dobro player David Hamburger, a transplant from the Northeast, who's worked with Freedy Johnston and a long line of New England folkies. While he's not yet in the same league as the acknowledged master of the Dobro, Jerry Douglas, Hamburger is still comparatively young. The rest of the Boys, guitarist/singer Will Walden, mandolin player Alex Rueb, banjo picker Mark Cavage, and bassist Vance Hazen, follow Hamburger's lead with some solid jams on a set of mostly traditional tunes. Of the originals, Walden's "Darling Our Love" features sweet harmonies, while Hamburger's instrumental "Smokeshire Blues" shows off his obvious talent. The rest are an eclectic mix of old-time, blues, and gospel numbers ("See That My Grave Is Kept Clean," "Send Me to the Electric Chair," "Pretty Saro," "Jerusalem Moan"), each done in a way that sounds contemporary while remaining respectful to the music's roots. Surprisingly, Buckeyed Rabbit is sonically equivalent to that of any recording on a major bluegrass label. The combination of refined chops and a well-executed mix makes it a disc bluegrass fans will want to seek out.