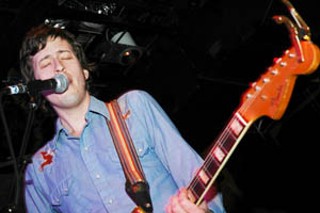 You know that feeling when you fall asleep in front of the TV, and snippets of dialogue float in and out of your semiconsciousness, and you're not quite sure if it's the beginning of a dream or the end of America's Next Top Model? American Analog Set's show last Friday night was a bit like that. Sure, AmAnSet's known for their lush melodies, not their live shows, but they never fail to draw a crowd, like the one gathered at the Parish to welcome the band back after months of recording a follow-up to 2003's Promise of Love. (You can hear three new songs by AmAnSet on the Songs of Hurt and Healing compilation, which is sponsored by those arbiters of hip, Tylenol.) Austin by way of Chicago by way of NYC quartet Paul Newman opened, factoring out caffeinated rock equations and calculated prog, balancing it out with instrumental jigsawing. Then came the crash. AmAnSet guitarist/singer Andrew Kenny gently strummed while Sean Ripple caressed the vibraphone "We're playing a slightly longer-than-usual show," Kenny remarked. "We just started practicing and they all made the cut." Older songs yielded newer songs, and soon eyelids were getting heavy and their intricate minilullabies blurred the line between conscious and medicated. "More xylophone!" someone shouted. Kenny's whispered vocals wrapped around Lee Gillespie's bass lines. "This is a great band to listen to when you're really stoned," comes a voice from nearby. Warm sighs grew into hypnotic codas on "The Postman" and "Hard to Find." "This song makes me want to hug you," murmurs someone else. As AmAnSet locked into their reverie, 100 different snippets blended into one buzzing dream.