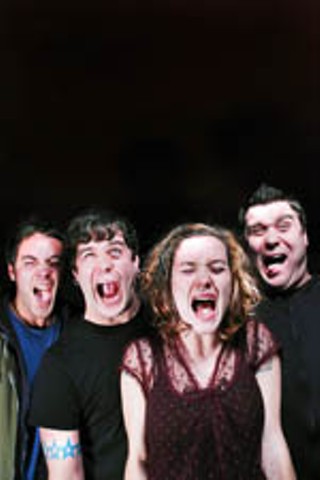 It's an unwritten law, pardon the pun, that the three fresh-faced siblings (and one fresh-faced near-sibling) in Cruiserweight constitute one of the most likable bands in Austin. Just try and find someone to utter a bad word about them. Not among the staffs of Emo's and the Flamingo Cantina, venues for which Cruiserweight has been a dependable weekend draw for years; not among the close-knit circle of bands – Schatzi, the Cutaway, Manatee (now Cassette), the soon-to-disband Dynamite Boy – they often share shows with; and definitely not among the local fans who voted the foursome Best Alternative/Punk Band at the 2003 and 2004 Austin Music Awards (the category has since been dissolved). Strangely enough, the only bit of grumbling about the band comes from its own singer.

"We're moody, negative sons of bitches, like, all of the time," insists Stella Maxwell, 24, sitting at a picnic table outside Trudy's Texas Star with drummer brother Yogi, 28, and bassist Dave Hawkins, also 24. Ironically, if there's any Cruiserweight member with a legitimate beef, it's guitarist, co-founder, and eldest Maxwell Urny, 31, who was laid out by some bad salsa earlier in the day and is recovering at home.

To be fair, Stella is discussing the low point of Cruiserweight's otherwise charmed five-year history. On Christmas Eve 2003, the Maxwells were preparing to leave for some holiday downtime in their hometown of Terrell – 30 minutes southeast of Dallas and also the birthplace of Oscar nominee Jamie Foxx – when they noticed something wasn't right with the lock on their equipment trailer. Further investigation revealed the trailer had been burglarized. Everything was gone: guitars, drums, amps, cabinets, microphones, merchandise. They estimated the loss at between $20,000 and $25,000, but could hardly be expected to attach monetary value to Urny's gold-top Les Paul or Yogi's drum set. Cruiserweight was heartbroken.

Word of the band's missing gear raced through the local grapevine almost before the police and insurance paperwork was filed. Thanks to their extensive network of well-wishers, Urny's conscientious cataloging of serial numbers, and some old-fashioned good luck, they were able to recover some items, including the Les Paul and Yogi's drums.

"We can always buy a new cabinet, a new head, stuff like that," Yogi says. "We got really lucky in the end. So many worse things could have happened."

Fortune has smiled on Cruiserweight in ways it didn't for Red Boxing, Yogi and Urny's previous band. Two and a half years and the most they had to show was an opening gig for the Make-Up. Cruiserweight, by contrast, played their first show before popular Gal's Panic offshoot Missile Command and Colorcast, an ancestor of Recover. It was a Thursday night at Liberty Lunch in front of 150 people, unreal numbers for a first gig. It doesn't stop there.

Thanks to its all-ages booking policy, Emo's adopted them early on, and Cruiserweight warmed up for the Get Up Kids, New Found Glory, and Alkaline Trio before the band was a year old. Hawkins' first show, about six months in, was facing more than 1,000 people outside at Emo's for an Impossibles reunion. Not that it was always easy opening such high-profile shows. They were, remember, still learning how to play together.

"All that time we sucked," laughs Stella.

Soon enough, they were writing songs as sharp and crisp and hummable as those headliners, and cut a couple of local EPs. The second, This Will Undoubtedly Come Out Wrong, came out November 2001 and secured their name alongside Dynamite Boy, the Riddlin' Kids, and Kissinger in the first tier of Austin pop-punk. Major labels were interested as early as SXSW 2002. Cruiserweight took their time and eventually chose Heinous Records because they befriended its owners, members of Nashville-based Feable Weiner, on tour.

Heinous is an arm of Doghouse, a well-regarded indie based in L.A. and Toledo, Ohio, with a track record of the Get Up Kids, Hot Water Music, the All-American Rejects, River City High, and Koufax. The band started working on their first proper album, Sweet Weaponry, in spring 2003 at their cousin's studio near Kansas City. They wrote half the songs as they were recording, but it still took a year to get everything the way they wanted it, and another year before it was ready to release.

"It was a baby, it was cute, a drooling little baby that everybody wanted to hold," figures Stella, "and now it's a terrible toddler that we just want to get rid of."

Though she started playing guitar in high school, and joined Urny at a Cactus Cafe open mic at age 14, Stella came to UT with ideas of being a theatre major. The instant-bonding benefits of band membership didn't have the same kind of appeal they did for her brothers, at least not at first.

"I think there's this sort of camaraderie that comes with being in a band that functions well and sticks together for longer than two weeks that's really, really closely linked to the sense of brotherhood that dudes have," she says.

Today her goal is to broaden her lyrical perspective beyond personal relationships, and points to several songs on Sweet Weaponry as evidence of her success. The opening lines of "To Be Quite Honest" suggest an awakening political conscience, and "Vermont" plays up the similarities between the music business and high school – both places, the author notes, "you still want to be popular." First single "Goodbye Daily Sadness" is about a favorite pair of shoes.

"I heard some rapper write a song about his hooded sweatshirt, and things he had gone through with it," she says. "I just thought it was the coolest idea."

"The lyrics are really, really strong," offers Yogi. "I think that's mostly due to the fact she wrote stuff she's passionate about."

Like the bands they were opening for not so long ago, a large part of Cruiserweight's appeal is that they could be the band next door. Though they've staged a few highly entertaining shows as Guns n' Roses cover band Mr. Brownstone, they don't have much of an appetite for destruction. Instead, fans take their songs to heart because they recognize themselves in the experiences Stella relates in her lyrics. By the same token, they attract the sort of listeners for whom music is about something beyond just being popular, sitting at the coolest table in the cafeteria, or having the current flavor of the week cued up on your iPod.

"Of the five years we've been in this band, there've been so many different trends that have come and gone," says Hawkins. "There's something to be said for just being yourself and doing what you love because you love it. I think kids can see past it. They can see that we're just who we are."

Cruiserweight play Emo's Friday with Dynamite Boy, the Cutaway, Cassette, and Dover Drive. Cover is $3 with a copy of Sweet Weaponry.