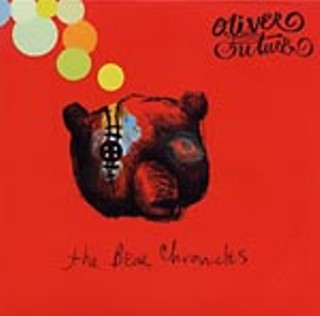 Oliver Future's new EP, The Bear Chronicles, proves this game Austin band has grown a bit in the last year. Following the respectable success of last winter's otherwise disappointing self-titled debut, they've returned with a four-song preview of what's in store for a second album, due fall 2005. Reteamed with producer Lars Göransson, Bear Chronicles claws out much of the overbearing Radiohead influence of the last LP in favor of a Faith No More-meets-Pulp sound. The results are still mixed, but at least the band sounds more refreshing in its approach. "The Hi Hat" offers a catchy refrain of "We can never slow down, never will return" mixed with glam flourishes, but it gets repetitive fast. The same can be said for "Friends V Pills," which isn't much more than three minutes of musings about – you guessed it – pills and friends. The song never explores territory beyond saying "My friends have been great, but the pills work better" over and over. Where Oliver Future succeeds is epic productions like the waltzy "The Fucked Up Bear Chronicles." In a relatively sprawling five minutes, their alchemy of sound and tempos creates its own spell. They use this extra time and space to flesh out their ideas, as they do on "When You're Dead You Stay Dead," and it makes for a better Oliver Future. So, unlike their aforementioned refrain, we want them to return. We just need them to slow it down a bit.