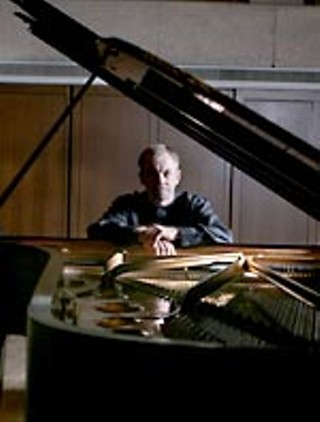 Anton Nel belongs to one of the most famous lines of pianists ever. Nel's teacher was South African virtuoso Adolph Hallis, who was taught by the most famous of the Romantic piano teachers, Theodor Leschetizky, who in turn was taught by Carl Czerny, a pedagogue whose studies most piano students still play today. Czerny was taught by none other than Ludwig van Beethoven, who for his part was taught by Mozart's composer friend, and rival, Joseph Haydn. Before that, the piano didn't even exist.

An internationally renowned, major-label musician with an impeccable pedigree, a revered member of the UT School of Music faculty, Nel calls Austin home, performing here regularly, and yet outside of the university and classical music circles, few people have heard of him. What was once a 100-concert-a-year schedule has been pared down somewhat, because Nel likes spending time in Austin. Some of his concerts cost upwards of $35, meager in classical music circles but prohibitive compared to Emo's. Many of his concerts, however, cost nothing. To see music performed at this level, by a musician with these kinds of credentials for free, is a privilege.

This story of Nel's teaching ancestry is the story of the piano itself, its literature, its performers, and its teachers. Living here in Austin, performing on a regular basis, we have a direct link to Beethoven. With Anton Nel, the bar is set as high as it will go.

The Birth of the Piano

1709: Bartolomeo Cristofori replaces the quills plucking the strings on a harpsichord with hammers that strike them. With this, everything changes. The composer's for-choice instrument for the next 300 years, one that combines the best qualities of its chief predecessors and becomes the king of the concert stage, also finds its way into homes both rich and poor across Europe and America, acting as the radio before the radio. It's an instrument that encompasses the range of an entire orchestra. So was born the piano.

Yet it didn't happen quickly. Cristofori made a handful of pianos, then stopped and returned to building harpsichords due to lack of interest in his odd new invention. The sustain pedal did not come for another 70 years, and the iron frame that allows for huge dynamics took an additional 50. Not until the end of the 18th century did the piano finally sweep its ancestors aside and take its central place. And it wasn't until the middle of the 19th century, after Beethoven, Mozart, Haydn, and Bach were all dead, that the piano reached its final stage of evolution and became the instrument Anton Nel plays today.

Bach didn't like the piano much. By the time he played one he was in his later years and a bit stuck in his ways, preferring the instruments he had grown up with. The Baroque era closed without developing literature for the new instrument, and the vanguard of the new Classical age, Mozart, Clementi, and Haydn, were the first composers that wrote specifically with the piano in mind. While the first two blew audiences away with their virtuosic flash, Haydn didn't possess this technical gift and focused more as a composer and music director than as a star soloist. He was massively popular across Europe and, living twice as long as Mozart, became an elder statesman of music and an inspiration for the next generation. He was "Papa" Haydn to his most famous student, a musician from the first generation that grew up playing the piano and helped bring the instrument into its own: Beethoven.

Beethoven, as Mozart and Clementi before him, was a combination of what later became separate, more specialized pursuits: composer, teacher, and performer. Like rock bands today, musicians of Beethoven's time wrote and performed their own music. And, like all pianists of his day, he was an improviser. In concert, an improvisation had a regular place. Oftentimes performers were given a theme at the event and were expected to dazzle all with the miracles they created with it on the spot. Even the composed music was not strictly held to, and composers often performed pieces differently each time, the written form being only one option.

As a teacher, Beethoven was selective, mentoring only a handful of students. One of them he discovered at age 10, already a composer and performer, able to play virtually all of Mozart from memory, as well as much of Beethoven's work. He taught this boy, who was of limited means, free of charge. The boy was Carl Czerny.

Czerny was no Beethoven. He didn't compose great music, he didn't shape the style of the era, and he didn't cause a ruckus wherever he went. Despite his teacher, he played the piano in a more classical, controlled manner. He didn't like people much, resisted performing, and lived with a bunch of cats. While he composed huge amounts of music, the biggest chunks of it were fantasias on favorite opera themes, the equivalent of writing elaborate piano arrangements of pop songs today.

What he did accomplish, however, had an enormous impact. He wrote a series of studies still considered basic to a pianist's development today; he became a proselytizer of Beethoven's music, helping to secure and broaden his teacher's legacy and, finally, he handed down his knowledge to the two greatest teachers of the Romantic era: Franz Liszt and Theodor Leschetizky.

Liszt got the glory. He was the rock star, the icon. Princesses swooned at his concerts and threw their jewels onstage. Kings and emperors and even the pope hoped for his company. More than anyone else, Liszt took musicians out of the servant class and into the upper echelons of society, starting simply by insisting on entering through the front door instead of the lowly entry in the rear.

Leschetizky got his due another way. Like virtually every other trade during the industrial revolution, music became more and more specialized, and though he composed and sometimes performed, Leschetizky was a teacher before anything else. Living until 1915, he brought old values into a new age. His students became the bearers of the legacy of one of the last of the Romantics. Late in life, Leschetizky was introduced to a new student, a prodigy from far away South Africa: Adolph Hallis.

Hallis became the father of South African pianism. As a friend of Debussy and Ravel and a student of Leschetizky, Hallis had their cachet transferred to him, and he went about creating a lasting legacy in his own country. Born in 1896 into what was then a British colony, he witnessed the entrenchment of the apartheid system, Mahatma Gandhi's passive resistance movement, the creation of the African National Congress, the release into national independence, and then died in 1987, just a few years before the final fall of apartheid and the radical transformation of his nation. Inside that world though, as far as Hallis knew (and Nel, for that matter), things were just normal; this was the way life worked.

Hallis became something of a star in Europe, though he never ventured much to the American continent. He took on students, spreading his gifts and knowledge to the next generation. South Africa's most prestigious piano competition was named after him, and because these competitions gradually become crucial career stepping stones for classical musicians everywhere, the Adolph Hallis Piano Competition became something of a rite of passage. Late in life, Hallis discovered a gifted child in young Anton Nel, took him on as a student, and secured the spread of his line into the Americas.

Anton Nel epitomizes 20th-century pianism: brilliant technique, intense focus, and a passionate reverence for the music and its creators. For the classicists the bar was "taste"; for the Romantics it was "expression"; for the musicians of the 20th century and beyond, it has been "the music," by which they mean following the written music strictly, studying and achieving the composer's intent and executing that intent as accurately as possible. Gone are the (now-deemed) extravagances and liberties taken in the Romantic age. Gone is the performer as co-creator; it's now the performer as interpreter and reconstructionist.

In a seeming contradiction, Nel explains that a teacher's goal is to help the student find their own voice. The trick is finding a balance between the purist and the individualist, where the music is true to itself and also comes to vibrant new life. Nel finds that balance. More than anything else, what separates him from most pianists is his precise control. While the extremes of a piano's dynamic range are the same for everyone with enough strength and a decent touch, what Nel's control creates is infinite shades between, amplifying his tonal and expressive powers exponentially.

Though Mozart is music history's most famous prodigy, the fact is that all of the premier pianists have been child wonders. Born 1961 in Johannesburg into a musical family, Nel heard his mother play from birth, but he himself did not settle on his instrument and begin real study until age 10. Despite that late start by classical music standards, piano came easily to Nel, and he devoured the repertoire while his skills accumulated at lightning speed. At 12, Nel's debut public performance was Beethoven's First Piano Concerto in C Major with his country's premier ensemble, the Johannesburg Symphony Orchestra. Thrust immediately into celebrity status, he became a regular on South African radio and television and won every piano competition in the country.

After finding his way to Europe and then the United States, he won first place in a critical piano competition, the Naumburg International, and he was off. His first faculty stint at UT was '83-'86, after which he left for the Eastman School of Music, returning to Austin in 2000. On Sept. 11, 2003, he became a U.S. citizen. Over the course of 13 albums (including recordings for EMI and Virgin) and after thousands of concerts, he's settled in Austin. With several standout students, including Michelle Schumann, he's begun to pass on his legacy.