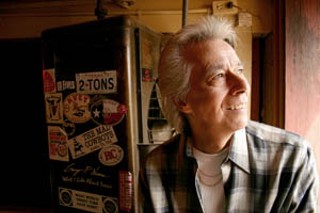 He'd gone to Buda for the funeral of steel legend Jimmy Day. Day was a longtime friend, and while paying respects to his wife, Mitchell was reintroduced to her sister Paula. The two started dating, bouncing between Texas and Nashville.

"We wound up getting married," grins Mitchell, "and we decided to live Buda instead of Nashville. Been here since 1999."

Mitchell was living in Fort Worth in the Sixties when he got a job playing guitar with Texas Troubadour Ernest Tubb and worked the Grand Ole Opry for more than 10 years.

"E.T. was a living legend," says Mitchell. "We played all the big dance halls around here and packed them all, so I was familiar with Austin and most of Texas. We'd work 20 or so dates in Texas alone, before ever leaving the state." Since settling with Paula in Buda, he's stayed busy playing with various local acts including the Troubadillos, James Hand, and James White and Alvin Crow's Hardcore Country band. He marvels at the variety of music found here and finds that life at 60 is sweet.

"It's the stage in the age where we just do what we do."