... And You Will Know Us by the Trail of Dead use their inside voices on 'Worlds Apart'

About 12 hours before the most famous Texan in America begins his second term – "Finally, the moment we've all been waiting for," observes Jon Stewart, "the official halfway point of the Bush presidency!" – an Austin band somewhat further down the rungs of celebrity makes its second appearance on The Late Show With David Letterman. Letterman himself is in Michigan accepting an award for his race car team, but stand-in Paul Shaffer is properly stoked. Like a lot of people, he's so taken with this band's name he can't get it out of his head. It's so ghoulish and foreboding, he decides, it can only be uttered using a vocal effect that makes the effusive Canadian sound like a hybrid of Darth Vader and Pinhead from the Hellraiser movies.

The gag gets a healthy laugh the first time, and Shaffer milks it at least a dozen more. His first guest, Broadway bon vivant Harvey Fierstein, muffs it as "... And You Will Know Us by the Trail of Death." Following segments with Ray's Regina King and Underground Garage capo Little Steven Van Zandt, the band, who long ago became just Trail of Dead to friends and fans, perform the stirring "And the Rest Will Follow" from new album Worlds Apart. Powered by mirror-image drummers Jason Reece and Doni Schroader, it's a seething knot of exposed-nerve tension, with martial, Wagneresque underpinnings that boil over into crashing waves of sound. Reece and Schroader fuel a final crescendo worthy of Carnegie Hall, and the din subsides. "That was fantastic!" enthuses Shaffer. "Finally, a band with two drummers that knows what to do with them!"

"When we first started, I don't think either of us had any expectations at all," says singer/guitarist/drummer Conrad Keely nine days earlier, as he and Trail of Dead co-founder Reece relax among the Japanese lanterns and rusted patio furniture of campus-area coffee den Spider House. The clicking laptops and hum of hipster conversation are light-years away from the Midtown mania surrounding Letterman's Ed Sullivan Theater.

"We didn't even know what kind of band we were going to be," Keely continues. "It was mainly based on the name. There was this other name that we had, the Crosstops. I think if we had chosen that name, we would have been more like some ska type of band."

The long-dead Two-Tone revival's loss has been discriminating rock fans' gain ever since. From chaotic and frequently violent origins in local punk rock dives and house parties, Trail of Dead have become avatars of a barely controlled sound that either roils just beneath the surface of civility or spews forth like a broken gas main. It was there on their unhinged 1997 self-titled debut for legendary Austin label Trance Syndicate, and remains, both augmented and refined, on Worlds Apart.

Appreciating this, industry behemoths Interscope Records signed the group in 2001, making them the only Texas-based act on the label and, rumor has it, the reason East Village art-punks the Yeah Yeah Yeahs came aboard a year later. Their résumé includes well-received appearances at the Reading and Coachella festivals, and a sold-out two-night stand at New York's Bowery Ballroom upon the release of 2002 Interscope debut Source Tags & Codes. Indie rock Web site of record PitchforkMedia.com afforded Source Tags a perfect score of 10.0, higher than either Interpol's Turn on the Bright Lights or the Arcade Fire's Funeral. The Chronicle's own Michael Chamy called it a record that "cannot be ignored," and it wasn't, selling north of 100,000 copies. Not U2 numbers, maybe, but certainly U2 numbers for an Austin band, which Trail of Dead are happy to remain.

"It's nice to come back to somewhere like Austin, where it's familiar," says Reece. "You know where to go to get your coffee."

"The L.A. music scene is shit," offers Keely. "The New York scene is way overhyped. There's nowhere in the world, definitely nowhere in this country, like Austin. It's so easy to go from one show to the next. You could see 100 bands in one night if you felt like it."

As one of the few local bands to bridge the era of Sincola, Starfish, and El Flaco with today's crop of Arms, Single Frames, and Dead Whale Tides, and one of the fewer still to experience real success beyond the city limits, Trail of Dead could be excused for viewing the local scene at a jaded rock star's remove. But they don't. When they're home, Reece and Keely can often be glimpsed scouring the clubs for the next band to take on tour with them. The list already includes Explosions in the Sky, America Is Waiting, Attack Formation, and Those Peabodys, and they hope to add metal monsters the Sword this spring.

Worlds Apart took shape at a nondescript former hip-hop studio on the fringes of Capital Plaza called the Mob House. A warren of parquet floors, wood paneling, and corkboard with an Xbox in the lounge and interesting pornographic line drawings in the bathroom, the studio bustles with pretour activity. Trail of Dead is tying up loose ends before setting out for a string of West Coast promo dates and Letterman.

Soft-spoken guitarist Kevin Allen tends to various gear in the rehearsal area. Schroader, lanky bassist Danny Wood, and band friend David Longoria lean back near the "sperm-proof couch" in the control room, laughing about drinking Pernod in Brooklyn on Entertainment Weekly's dime. Cluttered with cables, cases, empty beer cans, and an American Indian spirit drum, Mob House is the tangible fruit of Trail of Dead's Interscope labors. They acquired the studio in 2003 and spent several months fixing it up before commencing work on their fourth album.

"I remember at one point, I would be running to Guitar Center every day for some little thing we needed," reflects Keely. "I had to go up there all the time. But once everything was in place, then things started to go ... as rough as usual." 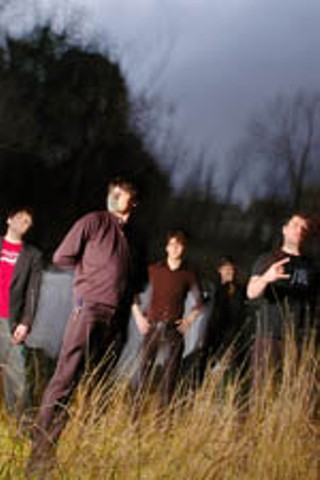 "It was never easy," chuckles Reece.

"We go into it thinking it's going to be Lord of the Flies or whatever," Keely adds. "It's intense."

The band brought in friend and producer Mike McCarthy, who helmed both Source Tags and Madonna, 1999's clamorous consideration of idols sacred and profane, to keep things on track. Complicating matters further was last spring's departure of founding bassist Neil Busch. Busch had memorably speared his guitar through his amp on Trail of Dead's first Letterman appearance; according to a message on TrailOfDead.com, his leaving was mutually agreed upon and more than a little uncomfortable.

"He had other priorities," allows Keely, clearly content to keep whatever transpired between Busch and the band. "Maybe we all felt the same way because we were making the record, and we were really a tight community, and he was just drifting further and further away, doing his own thing. We just felt like either you're with it or you're not."

"Well, Guns n' Roses did it in that one video," laughs Keely. "We're coming out of that era where punk rock had such an intense influence and such a disdain for virtuosity, and in a way classical music is the antithesis of everything punk has come to stand for. Not the original punk movement, which I think was more into experimentation – that whole anti-virtuosity, anti-refinement thing came later."

Lyrically, the album is as pointed as it is poignant. Echoing Trail of Dead's previous work, its central theme is the struggle to make meaningful art while trapped in a society that couldn't give a shit about such things. It threads "And the Rest Will Follow," which grew out of Keely's disturbing experiences with an Internet stalker, the "Immigrant Song"-like "Caterwaul," which author Reece calls a means to "liberate yourself from whatever is crushing you," and Keely's bohemian diary "Classic Art Showcase," which baits the bourgeoisie with its explosive refrain "Here I am! Comfortable!"

"I always think of the people on the Titanic that were partying as the ship went down, because they knew it was all going to hell," he figures.

"Maybe it is futile," reasons Reece. "Maybe we should become nihilistic and write pussy-party songs."

"We might," cautions Keely. "Because that would definitely be the next reaction. If everyone started writing really poignant, meaningful songs, it would be necessary to step away from that."

Due to their remodeling and recording efforts, Trail of Dead only played three local shows last year. The first was at the Playland skating rink for the Texas Rollergirls' Roller Derby finals; Keely sang a memorable "Star-Spangled Banner." The last was an October date at Emo's to kick off a short time-killing tour after Worlds Apart's release was delayed until January. Interscope didn't want the album to get lost in the year-end flurry of U2, Eminem, and Gwen Stefani releases, a move much appreciated by the band. Keely likens being on the label to "getting a loan from a bank you don't have to pay back."

"I think the success they've had with the acts they have has afforded them a certain liberty to put out things that they just purely like," he says. "We were never under any illusions. We didn't have any kind of obvious appeal to someone that would sign a band unless that person liked us."

Trail of Dead's appeal was most obvious at their other 2004 local show, a stageless, sweat-drenched July bloodletting at Big Orange, local buzz band Sound Team's AC-deficient, converted-warehouse headquarters on the Eastside. In conditions that would fell the people who dug the Panama Canal, they turned in a blistering set that had all the rambunctious energy and go-for-broke spirit of their early shows at the Blue Flamingo. Newly arrived from Olympia, Wash., Keely and Reece gravitated to the proto-Red River bar because it was the one place in town they didn't get kicked out of or shut down.

"That was the place where we were allowed to trash everything and they'd invite us back," says Reece.

The band's reputation for equipment abuse is well-founded; Keely notes, "We kicked over our drum set the very first show we ever played." These destructive tendencies have resulted in bodily injury, altercations with club owners and audience members, and nearly got them arrested at SXSW 2001. Fairly or not, they've come to define Trail of Dead as the Band That Breaks Stuff. In fact, there's even a Web site in their honor at BreakStuff.org.

"When we destroy our equipment, we don't have any regard for that equipment," Keely says. "All that matters is how we can entertain the audience. In the end, the broken stuff means a hell of a lot more to them than it does to us."

There's only one precondition on their wanton destruction of musical instruments.

"If it's not spontaneous, don't do it," Keely explains. "So when it does happen, it's usually like, 'Whoa.' And it often comes from someone I didn't expect, like Kevin, who's usually keeping it all together. Then he throws something across the stage at me."