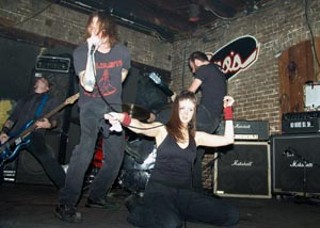 Billed as the "Red River Review Magazine," Rank & Revue is a fan-fueled, organically grown zine that salutes the overlapping underground, hard rock, punk, and hardcore scenes. And R&R has many reasons to kick loose: new distribution and circulation, new employees, and an expanded format. Most importantly, it celebrates two fruitful years of published mayhem, no mean feat for a Slackerville mag living in a digital-orgy world. So, what better way to get your party on than to pack Emo's with more than a dozen like-minded outfits, including Broken Teeth, Crank County Daredevils, Pink Swords, Bulemics, Ignitor, Possumbelly, the Dickins, me vs. everybody, Blood of Patriots, Scott Biram, Made Out of Babies, Disengage, Rockland Eagles, and Grady. In effect, it was R&R's nascent SXSW sans pretension, with a mostly local lineup augmented by bands from sundry states. In showcase-length sets, acts took turns on the inside and outside stages, and in spite of the eve's bracing temp, the club was mostly full. Songs covered social activism, unrequited love, smoking fry, working in the deep-freeze basement of Detroit's Joe Louis Arena in the winter, and everyone's favorite: reaping the benefits of overindulgence. Cleveland's Disengage were de facto headliners, and the former Man's Ruin sound forgers didn't disappoint, putting on a master class in conviction. The bassist jumped onto a load-bearing cocktail table, the singer fended off female fans, the drummer nearly fell over his kit, and the guitarist peaked a two stack Marshall pyramid – all while playing. In their closing slot, the Bulemics probably had better performances, but the hometown garage punk champs kept the dissipating crowd energized. All told, an evening of fulfilled promise and celebratory abandon. Cheers to a fine assemblage of rock-out talent. And congrats to the magazine as it enters its third year. In the spirit of the rag itself, I still wipe my ass with Rank & Revue.