Check It While I Wreck It: Black Womanhood, Hip-Hop Culture, and the Public Sphere 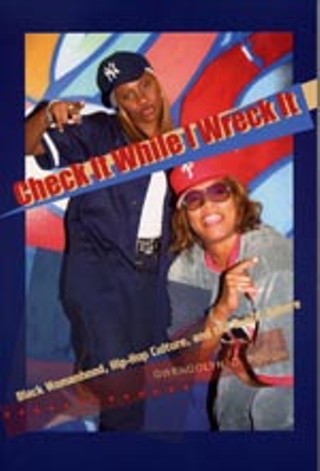 Check It While I Wreck It: Black Womanhood, Hip-Hop Culture, and the Public Sphere

If you've seen Nelly's video for "Tip Drill" you know hip-hop directors have run out of ideas. The plot in a nutshell: Scantily clad girls dance around, guys throw money at them, guy swipes a credit card through girl's ass crack as if she'll spit some twenties from her thong. In other words, Gwendolyn D. Pough's critique of black women in hip-hop is especially timely. There's always been a disconnect between "feminism" and "hip-hop," so author/women's-studies professor Pough attempts to connect the tenuous worlds of hip-hop, feminism, and black womanhood through music, film, spoken word, novels, and essays; she enumerates hip-hop stereotypes of women as "diva," "chickenhead," "ghetto girl," "mammy," and addresses music critic Nelson George's claim that "there are no women who have contributed profoundly to rap's artistic growth." Pough also traces the fingerprints of the term "bringing wreck" throughout hip-hop history, which means skills that challenge the norm – you're a dope MC with mad game. Her inclusion of spoken word artist Jessica Care Moore's "Hip-Hop Cheerleader" is one example: "I'm a Hip-Hop cheerleader/Carrying hand grenades/And blood red pom poms/Screaming from the sidelines of a stage I built." Pough cites many wreckers in her book, including Angela Davis, Sarah Jones, Salt-N-Pepa, Eve, and Mary J. Blige. Much time is devoted to Queen Latifah's 1993 hit "U.N.I.T.Y," for its shattering of the terms "bitch" and "ho" used so freely in rap songs. And yet, Pough applauds Lil' Kim's song "Queen Bitch," in which she raps, "I'm a stay dat bitch." Check It is a decent analysis of women in hip-hop, even though it often suffers from Pough's repetitive nature and wishy-washy statements. She does spotlight several lesser-known artists like U.S. Girls and J.J. Fad, but fails to give props to groundbreakers like MC Lyte, who's featured on the cover but never once discussed, as well as newer female MCs like Missy Elliott and Jean Grae. Here's the crux: Videos like Nelly's saturate the media every day. Female hip-hop does, too. This is all the more reason for artists to bring wreck.