Assessing 2004, local club owners break into a chorus of 'Staying Alive.' If only Dimebag Darrell had. 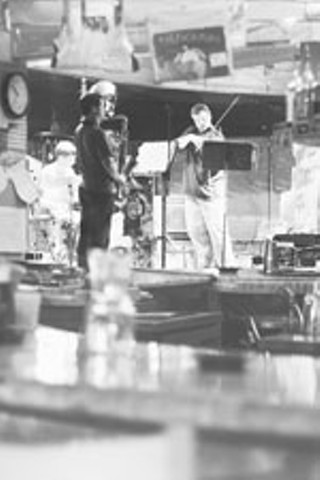 Another night in the trenches: the e.c.f.a. trio at Room 710 (Photo By Mary Sledd)

As students depart and the music scene enters its brief winter hibernation, local club owners are cautiously optimistic about both the passing year and the one ahead. "We've managed to keep the bills paid and everybody working," says Emo's owner Frank Hendrix. "We're still here, so I guess that's good," echoes Red River neighbor Woody Wiedeman at Room 710.

If 2004 wasn't exactly a watershed year for live music attendance, most people agree it wasn't any worse than 2003. "It's a hard call to make," says the Back Room's Tammy Moore. "Our crowds thinned out in October and November, but have picked up the last couple of weeks."

Hendrix says business has rebounded considerably since Emo's weathered "the worst summer we ever had," which he attributes to anxiety over the then-impending election. Postelection, the slumping economy continues to take its toll on the club scene, according to Moore, as higher ticket prices and less discretionary income force fans to be more selective about the shows they attend. "I just don't think people have the same kind of money they did at one time," she says. As a way of temporarily skirting the lack-of-funds problem, Hendrix says Emo's has seen a 20% increase in credit-card use this year: "That allows them to see that show they really can't afford and just deal with it when the bill comes."

Bucking the break-even trend is Headhunters, whose 2004 sales doubled last year's. "We're solid every day now, and it used to be just weekends," says owner Steve Ricci. "All the bands say they have a lot of fun here – that's really the bottom line." But where Headhunters has found success in offering several different types of music, across the street at Elysium, just the opposite holds true. 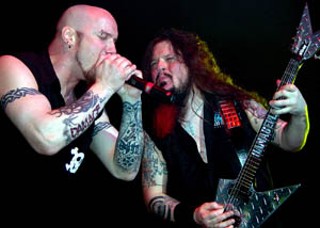 "Part of our success is catering to the never-ending demand for the Eighties," says owner John Wickham. Wickham's next-door neighbor, Randall Stockton of Beerland, says that although his club saw a little growth over 2003, there's plenty out there to concern him. "I'm more worried about pending legislation than dwindling crowds."

For Austin nightclub owners, storm clouds are gathering on a couple of fronts. Anti-smoking groups have begun circulating petitions that could put smoking in bars and music venues to a vote in next May's election. Furthermore, in the legislative session that starts next month, state lawmakers may consider raising the gross receipts tax on mixed beverages from an already steep 14% and revoking the sales tax exemption given to places that serve mixed drinks. If both happen, clubs could wind up paying nearly a quarter of their income to the state; more likely, many places would simply stop serving liquor. "Our margin is so slim that it wouldn't behoove us to keep liquor on," affirms Stockton.

Slim margins are a fact of life in the live-music business. Club owners are used to it, but that means having to get by with almost no wiggle room. Long-term success or failure often comes down to how well they do during those few hours each day their doors are open. "We're all working poor down here," says Room 710's Wiedeman. "We're always just focused on being able to open tomorrow."

When word of former Pantera guitarist "Dimebag" Darrell Abbott's murder filtered down last Thursday, Austinites reacted with varying degrees of shock, grief, and numb disbelief. Bartenders at Club de Ville put Pantera's Cowboys From Hell on continuous loop that night; Elysium regulars, led by bartender Frap, downed numerous toasts to Abbott Friday at the club's Eighties prom; and Human headlined an impromptu memorial Saturday night at the Back Room. "It was pretty emotional," Exit the Sun guitarist/singer Dan Johnson says. "A bunch of grown men crying at the Back Room – you don't see that too often."

Austinites acquainted with Arlington native Abbott, who was shot multiple times while performing with his new band Damageplan Dec. 8 in Columbus, Ohio, remembered him as friendly and down-to-earth, despite his fearsome metal-dude appearance. "I had the honor of meeting Dimebag about a year ago," says Redrum manager Mike Boudreau. "I found him to be a kind man and a warm spirit."

"It was always a treat to see the Abbott brothers around town, acting like normal people and having a good time," Powderburn guitarist Ken Lockman posted on the band's Web site. "They were always extremely nice to talk to."

"He was humble as he could be," says KLBJ-FM deejay Johnny Walker. "You'd tell him how great his band was, and he'd just nod his head and say thanks." Among other things, Abbott's murder has members of Austin's metal community rethinking their opinions of club security. "For the first time, it's made me think getting patted down at every club you go to is a good thing," Johnson says. "I hope they stiffen up security at shows," adds Terrible Palsy guitarist Johnny Hollywood. "If they don't, they're stupid."

Abbott's death is bound to have far-reaching implications, from the hoped-for increased security to possible higher insurance premiums for clubs, but the biggest by far is that musicians must now face the unsettling reality of simultaneously being performers and potential targets. "It worries me a little," admits Johnson. "I've got some crazy people in my life. You never know what they might do." "If you think we're nervous, you're right," laughed 81/2 Souvenirs guitarist Olivier Giraud, shown with singer Chrysta Bell, during the exotic swing sextet's first show in more than four years at the Cactus Cafe Monday night. Giraud's father flew all the way from France to be part of the packed house that saw the Souvenirs revisit their old-world repertoire, including "Happy Feet," "Black Trombone," "L'Amour Toujours," and Serge Gainsbourg's "Comic Strip." "I forgot how much fun this was," Bell said. So did we. The group continues their reunion minitour at Antone's tonight (Thursday) and the Continental Club Friday; unlike the Cactus, there should be plenty of room on the dance floor at both.

Willie Nelson is now in the restaurant business. The Red Headed Stranger liked the food at the Texas Roadhouse so much he opened his own franchise at 9300 S. I-35 this week. Nelson will appear at the restaurant at 3pm today to dedicate the first of four Willie-themed murals by artist David Carter.

Mystical Dallas R&B siren Erykah Badu will speak at SXSW 05, either on a panel or in a one-on-one interview. Mavis Staples has been tapped for the prelude music to Robert Plant's keynote speech, and confirmed performers include Aimee Mann, Beth Orton, and Fatboy Slim. That distant noise you hear is the splintering of floodgates.

Forget the malls. Why not do your Christmas shopping at an authentic Arabian "souq" (aka market)? Sunday, besides tons of nifty Near Eastern gift ideas, the Arabic Bazaar at 51st and Duval Street is offering food, music, belly dancing, gift-certificate giveaways, and free hookah samples. Did "TCB" mention the free hookah samples?

Bust out the hair gel and white suits: The never-more-relevant Duran Duran brings their stylish pop to Bass Concert Hall Feb. 17. Tickets go on sale Jan. 8 at all UTTM outlets.

Though he feels more like 40 at this point, "TCB" turns 30 Saturday. For reals. Condolences and free drinks accepted at Jackalope, Emo's, and wherever else the night takes him.