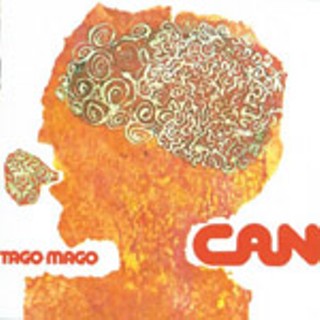 Hearing the primal, Oedipal utterings of Malcolm Mooney, it's easy to imagine the onstage nervous breakdown that led to the singer's exiting Can after only one album. 1969's Monster Movie is a razor-sharp, frenzied assault that stands as Can's most typically rock & roll work in a career spent redefining the convention. The German fivepiece featured a former free-jazz drummer, Jaki Liebezeit, whose unyielding lock-groove rhythms firmly tethered the dissonant compositional impulses of keyboardist Irmin Schmidt and bassist Holger Czukay, both disciples of modern classical anarchist Karlheinz Stockhausen. Second album Soundtracks comprised pieces written for obscure German arthouse films of the period. It was recorded shortly before Mooney left the band (including his career highlight "She Brings the Rain"), and in the wake of his departure. Improbably, these pieces represent the closest Can ever got to pop song structure. "Mother Sky" is arguably the group's magnum opus, and it resides here in its full, 15-minute glory. Damo Suzuki's stoned vocals border on narcoleptic, setting the mood for Karoli's screechy guitar fills, not to the mention the epic battle between Schmidt's abrasively dissonant synthesizer and Czukay's runaway freight-line bass. The following year's Tago-Mago is the altar to which a generation of art-rockers can only bow to. Liebezeit is a force of nature throughout, steadily propelling the back-masked indigo groove of "Oh Yeah" and the spasmodic "Mushroom." Even Miles Davis never achieved the flights of fancy found on 17-minute Afrocentric space-funk masterpiece "Hallejuwah." The lengthy "Aumgn" and "Peking O" are hypercreative burnt offerings to the Teutonic space gods. 1973's Ege Bamyasi brought a more tense, pronounced jazz influence, as well as a German chart-topping single in "Spoon." Tighter perhaps, but Ege Bamyasi was also more playful, and just as restlessly creative. These remasters have been a long time coming, and Super Audio compatibility is an added bonus.