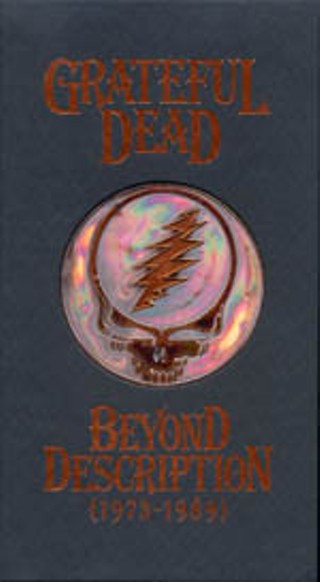 More than nine years after the death of Jerry Garcia, the long strange trip of the Grateful Dead continues ever onward. Beyond Description is the logical follow-up to 2001's The Golden Road, a 12-CD chronicle of the band's early years, almost entirely with Warner Bros. Here the story is joined with the Dead starting their own eponymous label and ends with their last studio album for Clive Davis' Arista, 1989's Built to Last. Beyond Description is another 12-CD investment, which clocks in at 15 hours of music, each album expanded with material relevant to the time it was recorded. That translates into a box set of 161 songs, 65 of them previously unreleased. Even then, however, anyone but the most tie-dyed would find this all just a bit inconsequential. Critics and Deadheads alike agree that during this time frame the band's studio work was almost completely overshadowed by their epic live shows. Which is not to say that there aren't some moments here, but you can put lipstick on a pig and it remains just that. There are a couple of albums that have weathered the passing of time well, especially the first two of the set, 1973's Wake of the Flood and '74's From the Mars Hotel. But then there's Terrapin Station ('77) and Shakedown Street ('78), which are more often than not lightweight fluff and even feature attempts at disco. Not surprisingly, the real highlights are the two live albums that the Dead recorded in 1980. Both Reckoning and Dead Set have been expanded to two discs. The first finds them in an acoustic setting, revisiting some of the folk and blues material of their earliest days. The stripped-down format allows them to revel in their roots while also providing the launching pad for a few uncommon acoustic jams that sizzle. Dead Set features some of the first shows done with keyboardist Brent Mydland, who offers plenty of evidence that he's a near-perfect fit. Yet even with its remastered sound, two expansive booklets, and plenty of rare tracks, Beyond Description offers little that's revelatory. A studio outtake with Lowell George singing "Good Lovin'" falls flat as do a few other demos and in-studio jams. Ultimately, this may be the box that Heads buy, listen to once or twice, then file away to gather dust on the path to unlimited devotion.