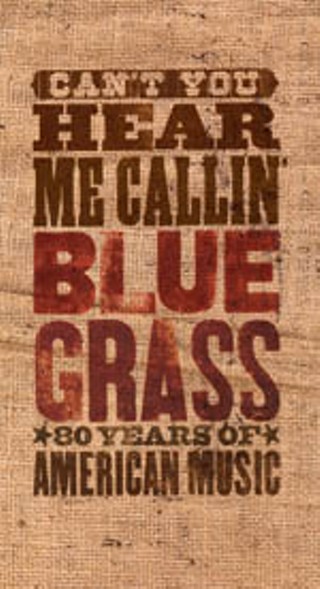 Anyone who grew up south of the Mason-Dixon Line is familiar with harmonies floating up from the pews every Sunday morning. They're also familiar with taking Jesus and Satan out of such gospel and replacing them with love and drinking. Finally, they're intimately familiar with the twang of the banjo and the tinkling of the mandolin. This is rural soul. Bluegrass rose up alongside the blues as the foremost of American originals, and the 4-CD Can't You Hear Me Callin' is that history set down in old-time music. That's eight decades of bluegrass, beginning and concluding with "Soldier's Joy," first recorded by Gid Tanner & His Skillet Lickers in 1929 and recut by Mark O'Connor in 1997 – not to be outdone by the Byrds in 1970 (as "Black Mountain Rag"). The point being that bluegrass is defined as much by its respect for the forebears – Bill Monroe, Roy Acuff, Charlie Poole – as it is by the music. Groups grew incestuously from within others, resentment replaced with a need to propagate the genre. The most illustrative example of this comes from Ricky Skaggs, possibly the only contemporary player of true bluegrass, who recorded Bill Monroe's "Uncle Pen" in 1983, 33 years after its first taste of vinyl. The godfather of bluegrass, Bill Monroe rightfully makes up a large chunk of this box set along with his musical spawn Lester Flatt and Earl Scruggs. Without Monroe, there would be no Dixie Chicks, Alison Krauss & Union Station, or possibly even the Byrds, all of whom constitute the last (and worst) disc in the set. This final chapter is like a $5 Willie Nelson T-shirt from the Seventies that was given to Goodwill and then later restitched, redesigned, and resold for $50 at Denim Edge. Somewhere along that line, rough edges that were so endearing become clean, machine-made seams. Blame it on Nashville. Regardless, the history of bluegrass is a vibrant one abbreviated in the set's companion 58-page booklet. Proliferated with the help of Hollywood – Flatt & Scruggs' "The Ballad of Jed Clampett," Eric Weissberg & Steve Mandell's "Dueling Banjos" from Deliverance, and the Stanley Brothers' "I'm a Man of Constant Sorrow" rerecorded for O Brother, Where Art Thou? – bluegrass is a tune that will never die.